Veteran Penny turns back the clock for Race 2 victory 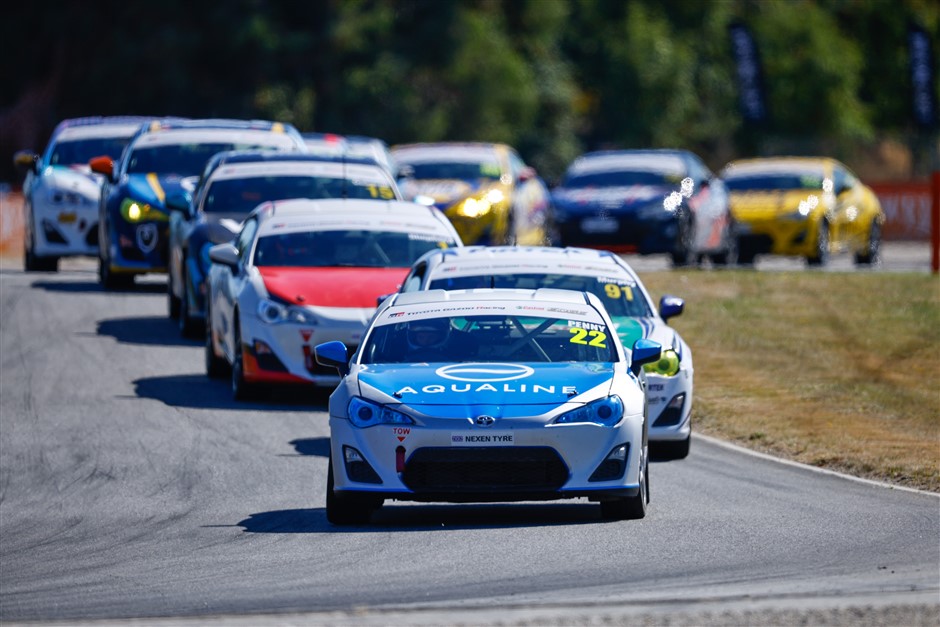 Veteran John Penny – the oldest competitor in this season’s Toyota 86 Championship – took his second ever victory in the category with a win in a shortened second race at the Highlands Motorsport Park today.

Two race stoppages – the second a race ending red thanks to oil on the track – ultimately meant there were only two racing laps from the 12 scheduled. With the grid formed as a reverse top ten of finishers from Saturday’s then the rest in finishing order, it was Penny on pole position in the Penny Homes car thanks to his tenth place finish on Saturday. Alongside him sat team mate Ronan Murphy in the Pirtek car.

The two raced side-by-side to turn one and it was Penny who held his nerve a fraction longer on the inside line and forced Ronan into second place. In a hectic first lap those two edged away from the pack and when the first Safety Car was called a little way around the lap when Todd Prujean hit the wall, Penny was ahead of Murphy, with champion Rowan Shepherd in third from his second row start.

Once Todd’s Tauranga Cars TR86 had been removed the race got back underway and Penny and Murphy resumed their battle a few car lengths ahead of Shepherd.

Clay Osborne gave further notice of his intent in this year’s championship with a lovely move to take third from Shepherd – but there was bad news for Clay afterwards when he was given a five second time penalty for a move on Matthew McCutcheon.

Moments later the race was effectively over when Murphy’s car started smoking heavily. Ronan pulled the car off the track as soon as he noticed the smoke and ran to get a fire extinguisher from the marshal as it looked like it could turn into a fire.

Fortunately it didn’t but a disappointed Murphy was out. Further examination proved the liquid on the track to be oil, although the fact there was no engine damage subsequently was of little consolation for Murphy.

With plenty of cleaning up to do, a red flag was shown and the result declared.

“I’m very happy to win of course but a bit disappointed we only raced a couple of laps,” said Penny. “I had plenty of speed and Ronan and I were pretty comfortable in staying ahead. It’s great fun when it’s that good of course but a win is a win and I’ll take it.”

Further back, Saturday winner Simon Evans took sixth while Brock Gilchrist, who retired from race one, showed why he will still be a factor in this year’s championship by making up eight places in the short time he had at race pace to finish an impressive 12th.

After the race, Zac Stichbury was given a ten second time penalty for contact that put Todd Prujean out while Hugo Allan dropped to seventh in the final standings having been given a five second penalty for a Safety Car infringement.