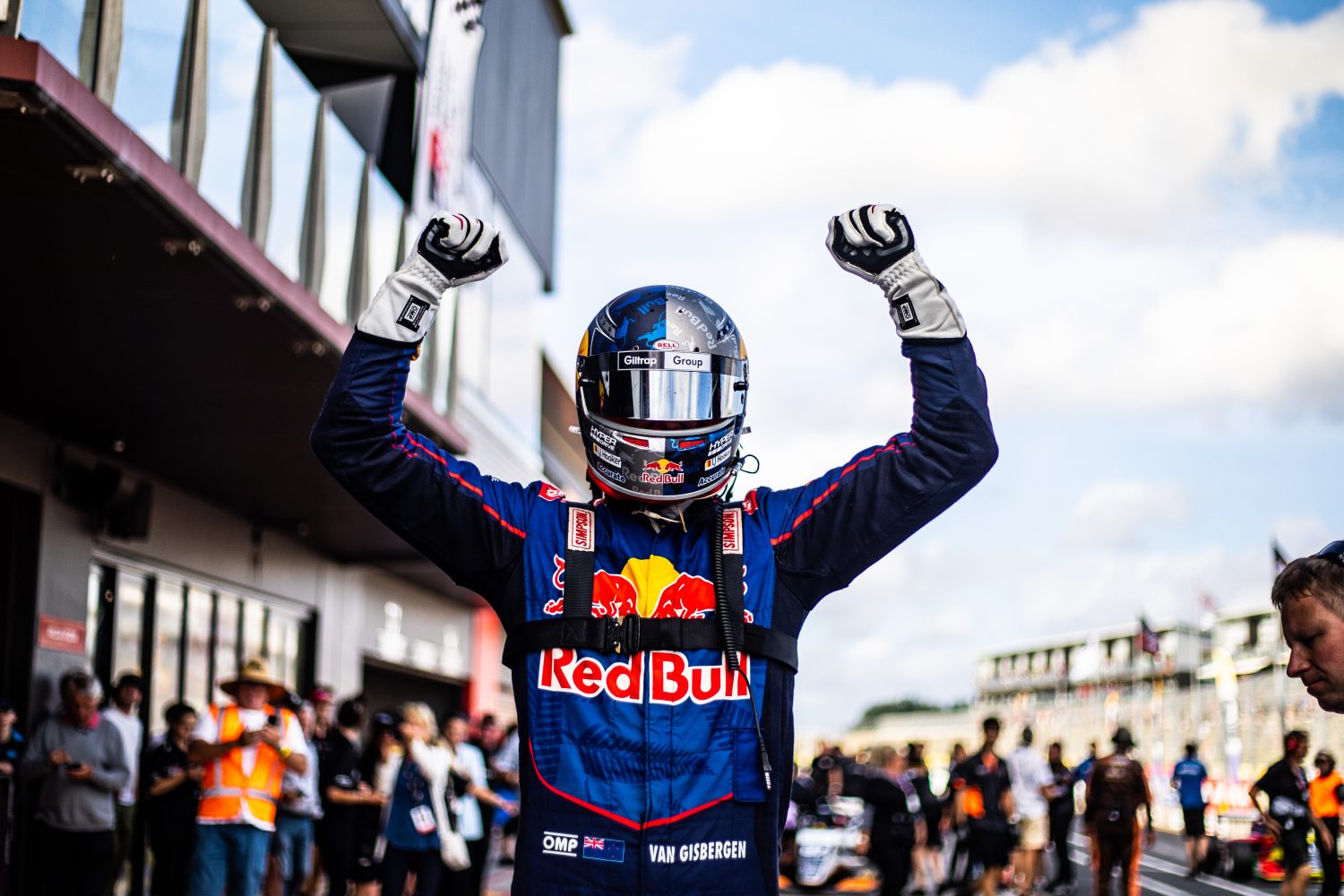 After setting the fire extinguisher off in his car before the start, Shane missed the pit lane window to exit and was forced to start from the pit lane after his team completed a hasty cleaning out of his car, his overalls, his boots and a replacement fire extinguisher. He put that behind him and set off after one of the best fields ever assembled for the Grand Prix, a field which featured more than 50 domestic and international championship titles on its collective resume.

A Safety Car when Peter Vodanovich stopped out on the track came at the perfect time, but this was still a Herculean effort. After ten laps he was inside the top ten, by the fifteen lap mark he was in third and on the 19th lap he completed his drive through the field to take the lead.  From there he continued to put in some of the weekend’s fastest laps and he crossed the line after 28 laps of the gruelling 4km Hampton Downs international circuit to take victory by two seconds.

“It didn’t really get off to a good start when I pressed the fire extinguisher by mistake but the team were awesome getting me ready to go,” he said afterwards. “The safety car was perfect and the car was really hooked up and absolutely awesome. I’m surprised it’s all still there as it was a bit of a rough up going through the field.”

“To get my name on that trophy is a pretty special thing. Looking at those names from the 50s and 60s and some of my heroes too. I’m stoked.”

It was fitting that 79 year old Kenny Smith – making history with his 50th NZ Grand Prix start – was on hand on the podium to present the historic Motor Cup Trophy, back where it belongs in Kiwi motorsport in the hands of the Grand Prix winner.

André Heimgartner – another V8 Supercar driver and another driver of immense talent – came home an impressive second after his best performance of the weekend. André raced with a heavily strapped left hand after heavy contact in the morning race. In a normal year it would have been a winning drive, but this was no normal year.

Matthew Payne was another to excel. Having only just gained his circuit racing license for the TRS series, the accomplished karter – with Red Bull Junior Liam Lawson his radio contact throughout the weekend and the race – completed a stellar debut weekend to come home third in the Grand Prix after a fierce battle throughout. Fourth and fifth after their own dramatic races peppered with passes and heart stopping moments on and off the track were pole position man Kaleb Ngatoa and Damon Leitch – another to save his best performance to last.

The race only had one Safety Car when Vodanovich stopped, but there was action and drama throughout. Daniel Gaunt – a two time winner of the big race himself – charged into the lead at the start and controlled much of the race until van Gisbergen arrived on his tail. One of the pre-race favourites, Chris van der Drift was attempting to pass for the lead when he clipped the back of Gaunt’s car and damaged his front wing. He headed for the pits almost exactly as Vodanovich pulled up and managed to get the nose changed and get underway. Another spectacular drive through the field brought him to fifth place at the end although a post race penalty for a driving infringement dropped him to 12th in the final results.

Damon Leitch saved his best to last and emerged from the dogfight that was the race to claim a solid sixth. Brother Brendon had a spectacular race himself on his way to seventh, while Daniel Gaunt had to be content with eighth after a superb drive controlling the race for the first 19 laps. His drive might have netted much more had it not been for the Safety Car.

Billy Frazer survived the drama and a huge moment across the grass at the exit of turn one to take ninth and another motorsport legend – four time Bathurst winner and 1994 Grand Prix winner Greg Murphy rounded out the top ten with a feisty drive that saw him right in the mid field battle throughout. Conrad Clark, Tom Alexander, Chris Vlok and Joshua Bethune made it home to the finish and were never far from the lead pack or pace while a gutsy Smith made it home to a cheer from the crowd as big as the one for the winner.

No other driver has or is ever likely to match Smith’s New Zealand Grand Prix record. From Moss and McLaren to Norris and Tsunoda. He’s raced them all.

A day of records, and one which gives New Zealand motorsport a major boost, was complete.