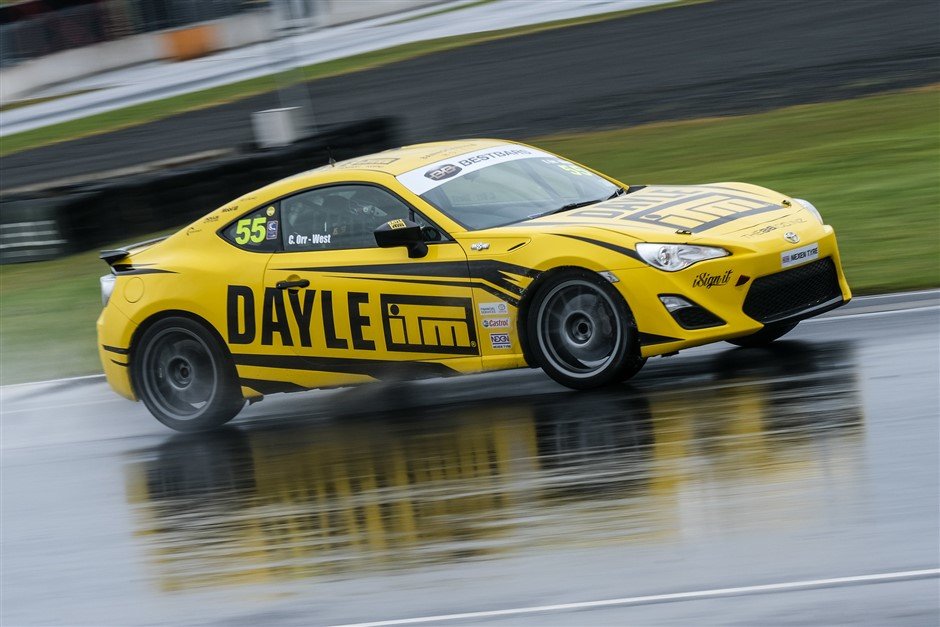 Up and coming Kiwi racer Ronan Murphy is a high profile entry for the second of the TOYOTA GAZOO Racing mini enduros at Pukekohe Park over the weekend of December 4-6 and he will be joined on debut by former Black Beauty A1GP racer Chris van der Drift.

The duo will be entered in a second Dayle ITM Racing Toyota 86 for the two one-hour endurance races over the weekend, ahead of Ronan competing in the full 2021 Best Bars Toyota 86 Championship.

Ronan (19) joins the series on the back of a USA Formula 4 campaign, which followed seasons in New Zealand in both Formula First and Formula Ford.

“I’m really looking forward to giving it a good go over summer in the 2021 Best Bars Toyota Racing 86 Championship and I can’t thank Deb and Martin Day and Dayle ITM enough for this amazing opportunity,” explained Murphy. “It will be another really good chance to learn a lot in a different type of racing compared to my previous experience and I’m really looking forward to working with Chris in the enduro.”

Thirty four year old van der Drift is one of the country’s finest all round drivers. He has extensive single seater experience having raced in A1GP and Superleague Formula, he’s raced in Porsches, in the Lamborghini Super Trofeo series and in GT3. He’s competed at Bathurst in both the 12 Hour and the V8 Supercar 1,000km classic. He was on the Honda Formula One radar as a potential test driver when they left F1 back in 2008.  Chris has also helped numerous young drivers over the past few seasons, including coaching several in the Toyota 86 championship.

More recently he shared driving duties with Glenn Smith in the latter’s McLaren to win the first round of the North Island Endurance Series and has also been testing the Toyota FT60 TRS car as TOYOTA GAZOO Racing has continued its development and testing programme. He’s also been busy with his own karting team, Veloce Karting.

“I’ve done a bit of development work with drivers who have competed in the series over the years so it will be interesting to be in the hot seat,” he said. “I’ve really enjoyed the racing I’ve been doing in New Zealand since international travel became so difficult and I’m looking forward to Pukekohe just as much. It should be a great weekend.”

Team owner Deborah Day is delighted to have secured the services of Ronan and Chris and is excited at the prospect of seeing how they go against the regular runners and their Dayle ITM Racing team mates Christina Orr West and Rowan Shepherd.

“We’ve followed Ronan closely through his time in Formula First and Formula Ford and more recently the US F4 series,” she explained.  “As we all know it’s been a tough year for all international motorsport and travel and we’re delighted to have secured Ronan for this endurance race and for the 2021 sprint championship. He’s one of our best young prospects. Having Chris sharing the driving duties at Pukekohe will excite and fascinate every motorsport fan and that’s a win for motorsport and a win for us even before the cars take to the track.

“They will bring speed, experience and much more besides. It will be a very cool weekend and a great way to kick off a new partnership with ourselves and Ronan.”

The first round of the TOYOTA GAZOO Racing TR86 endurance championship produced some excellent performances from a small field – including eye catching performances from Orr-West and Shepherd who charged their way to the runner up spot in the second of the two one hour mini enduros. Category manager Geoff Short believes the Murphy/van der Drift entry for the second round will encourage further entries from TR86 racing car owners for the second race weekend.

“The one hour race is a great format with the two drivers and everyone who competed in the first round are eager to do it all again,” he said. “But how often do you get to race a driver with the calibre and experience of Chris van der Drift? It’s fantastic for Toyota 86 racing in New Zealand and a great way to mark Ronan’s entry into the class for the 2021 Championship. We’ve already got names like Daniel Gaunt and Simon Evans competing, so for any driver it’s going to be a good event to be part of and an even better one to win.”