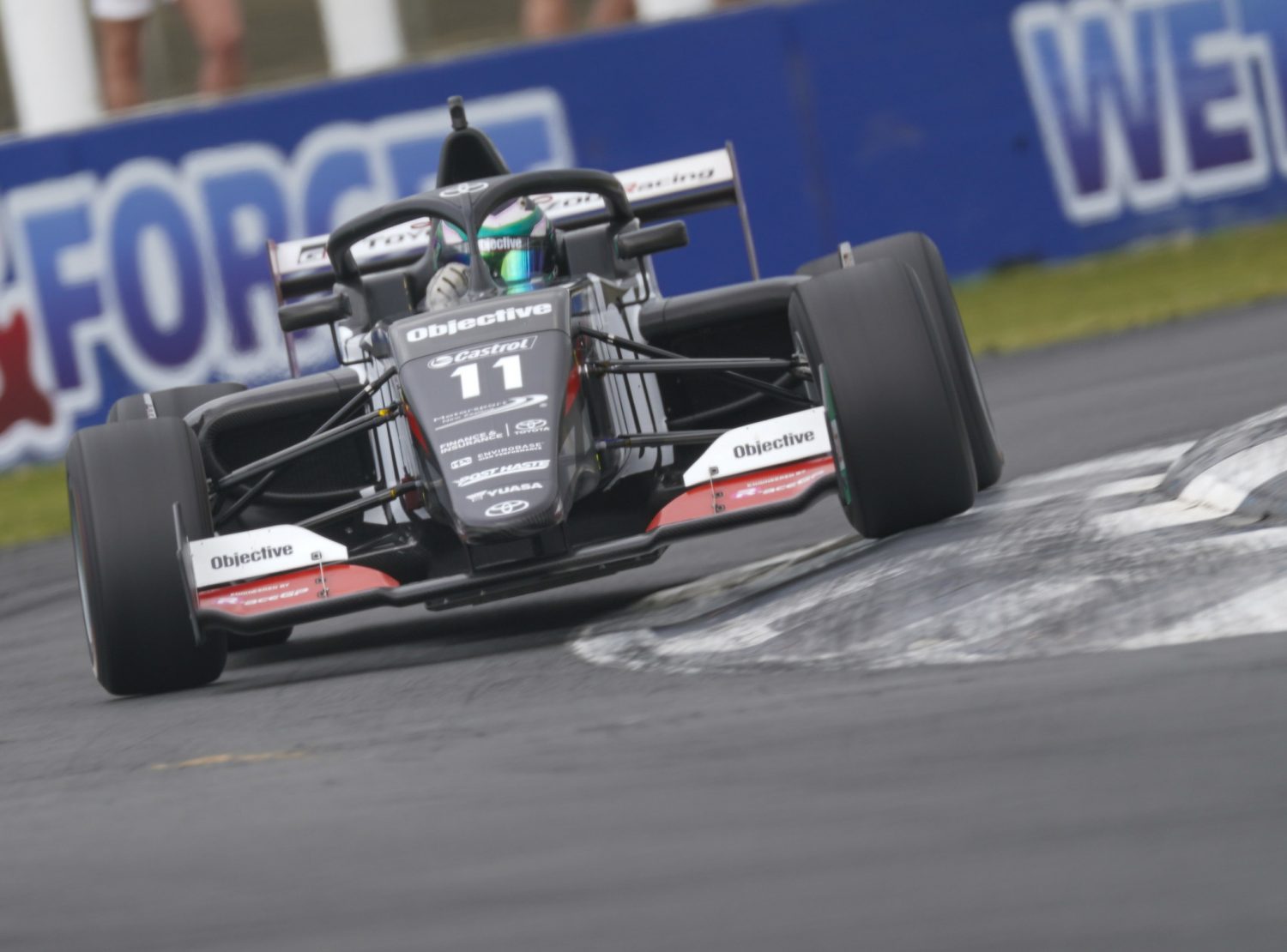 Australian Jackson Walls was a popular winner of the second race of the weekend at Pukekohe Park on Sunday, the mtec Motorsport engineered by R-ace GP driver leading from start to finish in the 20 lap encounter.

It marked the 17-year old’s first major international single seater win. Petr Ptacek finished a fighting second having chased Walls all the way while Argentina’s Franco Colapinto held off championship protagonists Liam Lawson and Igor Fraga for the final place on the podium.

A topsy turvy grid should have been formed with a simple reverse top eight from Saturday’s finishing order, but a raft of penalties for formation lap infringements in that race left Australian Jackson Walls on pole position with Petr Ptacek alongside him on the front row.

Walls made the best getaway in a clean start and led into turn one and through the tricky complex onto the back straight. He took Ptacek with him and the two then began a cat and mouse battle that pulled them a few lengths ahead of the field and left the rest in their wake. Behind, there was plenty of drama as Fraga dropped three places behind Lawson, Yuki Tsunoda and Ido Cohen through the complex. The rest of the field made it through cleanly and settled into a high speed train over the first lap.

As Walls and Ptacek duked it out at the front, Franco Colapinto had his mirrors full of Lawson and the reigning champ had a big train behind him. That order was mixed up early on when Tsunoda and Cohen dropped back, allowing Fraga back up into fifth – just behind Lawson. This was good news for the Brazilian, who could keep his eye on his main championship rival and be in the right place to pick up the pieces if the Lawson and Colapinto battle boiled over.

The order remained static the half way point it was Walls, throwing everything and more at it through the dauntingly fast corners of Pukekohe, with Ptacek in hot pursuit. Behind the top two and a few car lengths back it was Colapinto, Lawson, Fraga, Grégoire Saucy going well again for a recovering Tsunoda and Cohen, Rui Andrade enjoying his best race in the championship and Tijmen van der Helm.

As the laps counted down the front two retained their advantage and try as he might Lawson could not find a way past the robust Colapinto. Fraga played the waiting game well, but had to settle for fifth at the end. Saucy, Tsunoda and Cohen all closed up on the battle for third, but the status quo remained until the end and it was a delighted Walls who took his first win in the Castrol Toyota Racing Series. Ptacek’s second place made it a 1-2 for mtec Motorsport.

“That definitely something I wasn’t expecting. I’m speechless,” said Walls afterwards. “I haven’t been doing the best starts, but luckily I got a good enough one this time. I made a few mistakes, but I held on for the win. All the years of hard work have been put into this and honestly I couldn’t be happier.