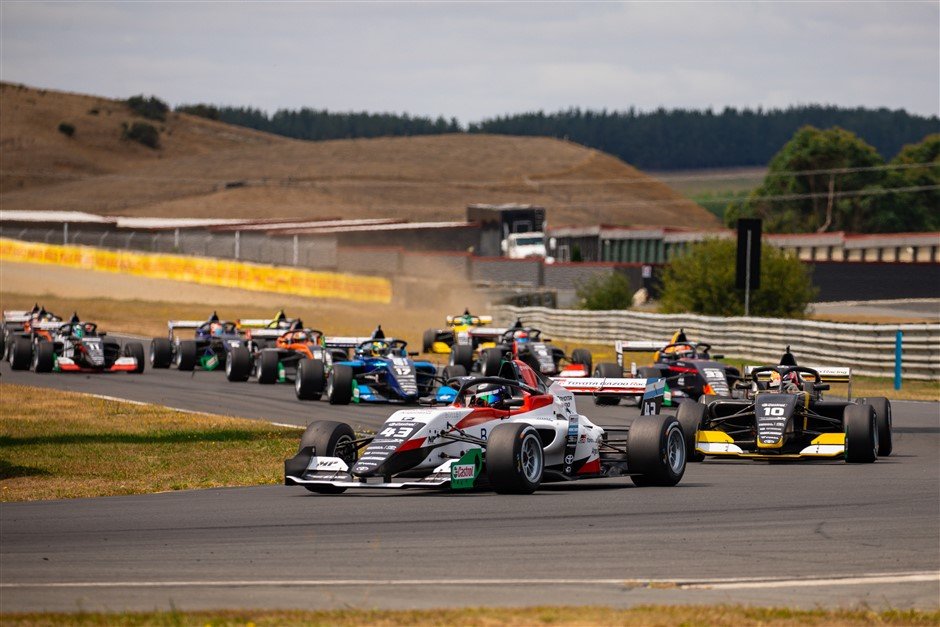 Sixteen year old Franco Colapinto became the sixth winner from eight races in this year’s Castrol Toyota Racing Series when he won the second race of the weekend at Hampton Downs.

Starting from the front row off a grid order based on a reverse top six from Saturday’s results, Colapinto edged pole position holder Oliver Rasmussen into the first corner and never looked back. Marginally quicker than the chasing pack throughout the race, he was able to maintain a slender lead for the 20 lap encounter, retain his lead after a Safety Car period and hold off championship leader Liam Lawson for his first win.

The Spanish Formula 4 champion – who races under the watchful eye of F1 legend Fernando Alonso – may have taken the lead into the first turn but it was Lawson who made the best start, bursting out of the third row to take third as the cars swept down the hill towards turn two. That put immediate pressure on his main rival in the championship, Igor Fraga, who started alongside him but found himself with two places between himself and Liam as the dust settled after the start.

There was plenty of drama behind the leaders too as a fast starting Caio Collet made contact with Yuki Tsunoda on the exit of the fast first corner, forcing the Brazilian to take to the grass. Tsunoda would later be penalised for the move, a 10 second penalty dropping him to 16th in the results. Ido Cohen also endured a dramatic first lap, and ended it with a trip into the M2 Competition pits for a new nosecone and front wing.

As the field surged around the first lap of the tight and compact North Waikato circuit, it was Colapinto who crossed the line first, with Rasmussen second, Lawson third, Yuki Tsunoda a fighting fourth, Fraga in fifth, Grégoire Saucy in sixth, Petr Ptacek in seventh followed by Lirim Zendeli, Jackson Walls and Henning Enqvist rounding out the top ten.

With only hundredths of a second separating the front runners lap times, they ran nose to tail but did manage to build a margin to the chasing group behind and it was the top three that initially formed that breakaway group. Fraga’s pressure on Tsunoda, however, spurred both on and they began to close in on the top three after four laps to make it a five way battle for the lead. Behind, a great scrap between Saucy and Ptacek was the main focus in the battle for the sixth to tenth place positions.

The order remained static until the halfway point when Tijmen van der Helm dived up the inside of team mate Axel Gnos at the dipper, almost resulting in another roll over at exactly the same point of the track where Gnos flipped his car during Thursday testing.  This time the car stayed on all four wheels, but ended up buried in the gravel at the exit of the corner and that brought out the one and only Safety Car of the race. Van der Helm was given a five second penalty for the move after the race.

The field got the go with five laps remaining and it was Lawson who made the boldest move to dive down the inside of Rasmussen to grab second place. Fraga also tried to force Tsunoda into a mistake with some persistent passing attempts on the restart lap, but he couldn’t make any of them stick and he had to settle in to fifth, which became fourth after Tsunoda’s post-race penalty.

Although Lawson got close to Colapinto, the Argentinian maintained a strong pace and made no mistakes over the remaining laps to record his first win of the series, and Kiwi Motorsport’s first as well.