Vodanovich holds off Ransley to win at Highlands 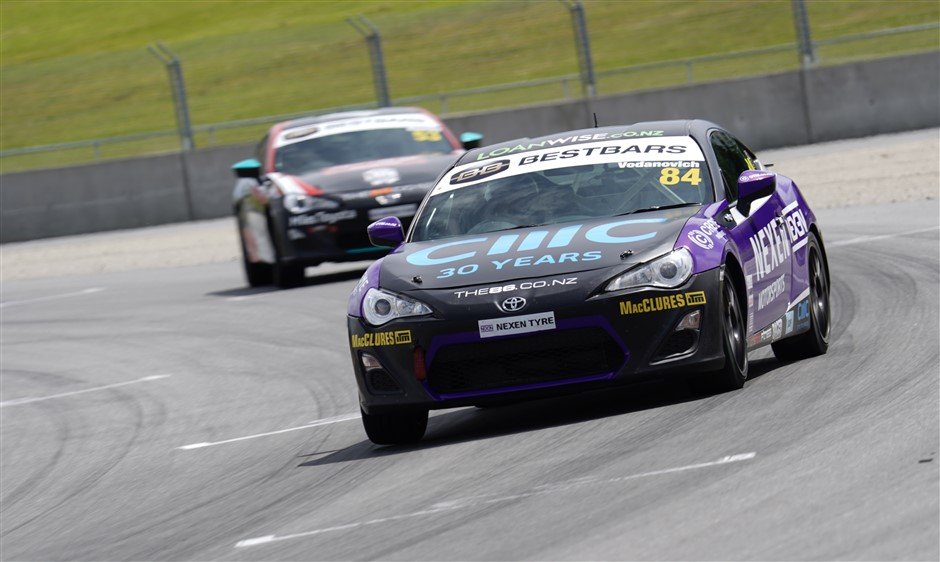 Peter Vodanovich scored an impressive victory in the first race of the Best Bars Toyota 86 Championship at Highlands Motorsport Park on Saturday afternoon – withstanding huge pressure from championship rival Jaden Ransley to hold on for victory.

Pole position holder Vodanovich in the Nexen DTM and CMC Markets car and front row sitter Ransley in his Miles Toyota machine both made great getaways as the race began, sitting side by side on the long drag to the first chicane. Vodanovich braked a touch later and surged through the chicane in the lead. It was a critical moment. Both Vodanovich and Ransley had massive speed compared to the rest of the sixteen car field and quickly established a significant lead over the chasing pack.

That chasing pack provided some fantastic racing right from the go, with Campbell Stewart, Connor Adam and Richard Peasey all getting away well from the start. Championship leader Jaylyn Robotham didn’t get a good start from the second row and initially fell back, but as the first lap unfolded he quickly got into his stride. Stewart had initially taken Connor Adam for third, but the Pose Haste-supported racer battled his way back with a great move later in the lap. Robotham too was on the move in his Eastern Performance Centre car and fought his way back up to fourth by the end of the lap.

As the cars surged over the line it was Vodanovich and Ransley, already with a two to three car gap ahead of the field, followed by Adam, Robotham, Stewart, Australian Richard Peasey, Brock Gilchrist in the NEXUS Logistics car, Justin Allen in the Battery Town racer, a flying James Wilkins after a great start and Ryan Wood going nicely in the CareVets car.

The two leaders continued to build a lead on the rest of the field and Ransley initially fell back from Vodanovich. That would change later but all of the action in the eight lapper was further back as the fierce scrap for fifth, sixth, and seventh unfolded.

It looked like Gilchrist might prevail, but contact with Campbell Stewart left his car wounded at the front and this allowed Campbell to pull away and lock in a top five finish. Gilchrist spent the second half of the race defending heavily from Peasey, who tried some thrilling moves to find a way past but ultimately couldn’t get by the feisty young Aucklander.

As the flag fell after eight frantic laps, it was a delighted Vodanovich who took the win. Ransley had clawed back the gap and crossed the line virtually alongside Peter.

“Jaden always hooks up a great battle,” said Vodanovich. “We’re both quite respectful of each other and it produces some good racing. I was holding, he was quite fast at the end there. I’m happy with the drive. I think it was a bit of car, a bit of driver. We’re still going to need to work on that tonight and make sure we’re dialled in for the next race tomorrow morning.”

Some seven seconds after the first two, Connor Adam came home in third with Robotham fourth, Stewart fifth, Gilchrist sixth, Peasey seventh, Ryan Wood eighth after a solid drive through the mid field with Justin Allen and Andrew Jackson in the North Shore Toyota car rounding out the top ten.