Robotham back on top after trio of Teretonga thrillers 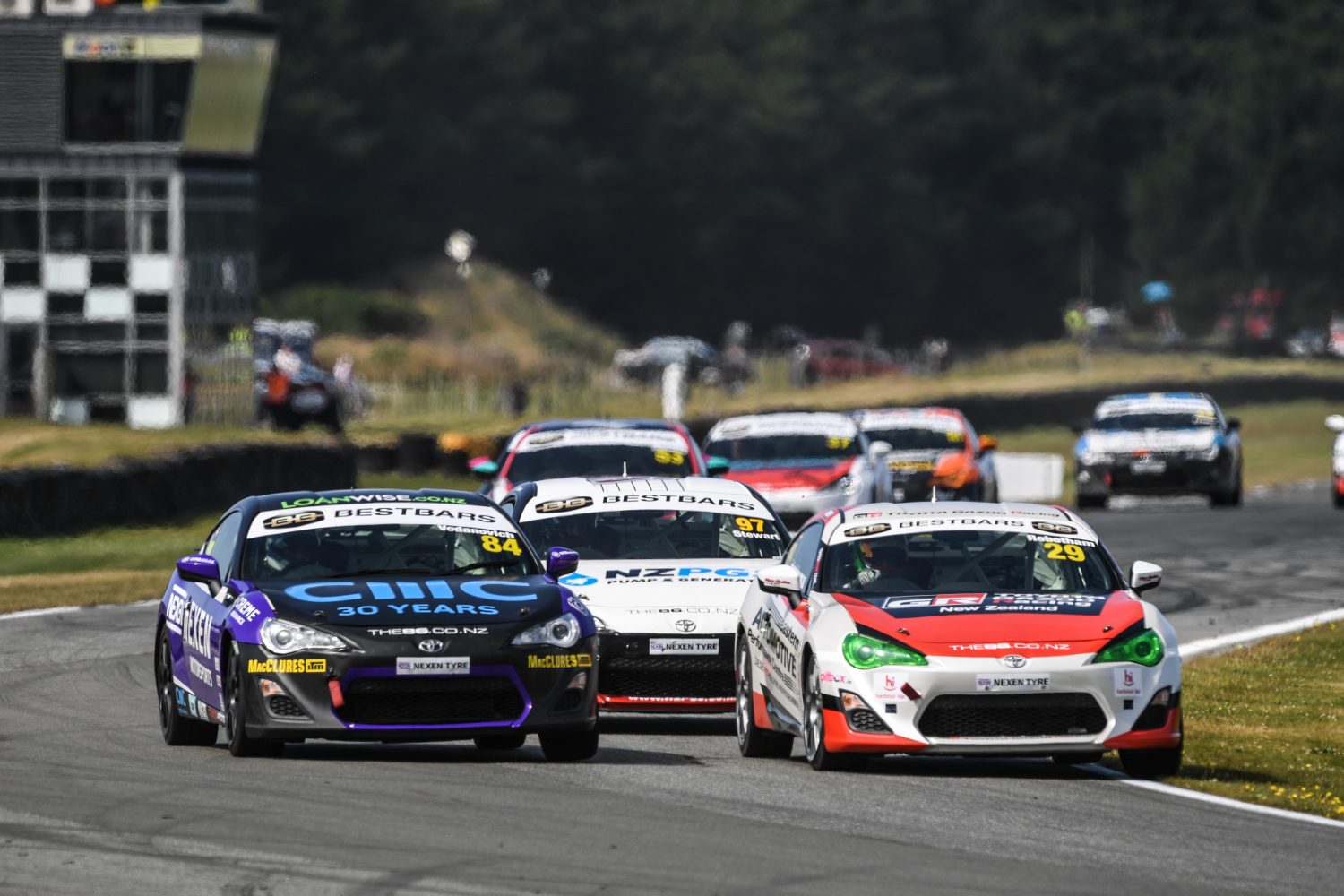 Three superb races were the highlight of the third weekend of racing in the Best Bars Toyota 86 Championship and it was Australian ace Jaylyn Robotham who emerged from the intense heat and action at Teretonga Park to claim two wins from three, the round win and the series lead.

Robotham, Campbell Stewart, Jaden Ransley and Peter Vodanovich set the pace all weekend and all four had their moment in the Invercargill sun. Robotham got two wins, Vodanovich one, Ransley was a constant factor and Stewart joined the regular front runners in this year’s championship with his best ever performances.

In the first race Robotham was pushed hard all the way by Vodanovich as an eight car battle for the lead slowly became a two car scrap which was ultimately won by the Eastern Performance Centre car of Robotham. Third – for his first podium in the championship – was Campbell Stewart in his M2 Competition run Total Oil car.

It had been Stewart who got the best start on the long Teretonga straight but it was Robotham who won the drag race into the first corner to emerge from it with a narrow lead. The rest of the field emerged cleanly and as the cars surged across the finish line to start the second lap it was Robotham, from Stewart, Vodanovich in his NEXEN DTM car, championship leader Jaden Ransley in the Miles Toyota car, Connor Adam in his Post Haste car, Australian Richard Peasey, a fast-starting Justin Allen for Battery Town, Brock Gilchrist in his NEXUS Logistics machine with James Wilkins and Brayden Phillips rounding out the top ten.

The action at the front intensified when Stewart made a big push for the lead under braking for the final turn on lap three. He almost made it stick but Robotham’s robust defence compromised both slightly and allowed Vodanovich and Ransley to close right up. Vodanovich made a great exit from the final turn to forge ahead of Stewart, who in turn only just managed to hold Ransley at bay.

Vodanovich was piling on the pressure for the lead and with the laps counting down he made a lunge for the lead at the final corner and looked to have made it stuck. A poor exit onto the main straight however, allowed Robotham to out drag him up the straight and retake the lead and that was how the order remained for the rest of the race.

Robotham was first, Vodanovich second, Stewart a personal best third and Ransley right up there again in fourth with Connor Adam fifth.

Jaylyn made it two from two as he led from lights to flag in the second race on Sunday morning after another epic Best Bars Toyota 86 encounter. And once again it was a very closely fought affair.

At the start, it was another drag race between the top two contenders from Saturday, with Robotham and Stewart leading the drag race from the front row to the first corner. Robotham held his line around the fast and long corner to emerge in front. Adam, meanwhile, had made a great start from the third row to jump Jaden Ransley for fourth position while Peter Vodanovich sat in third place in the NEXEN DTM car.

As they crossed the line for the first time it was Robotham, Stewart, Vodanovich, Adam and Ransley occupying the top five places, but it all went wrong for Adam on the second lap when his car slowed suddenly. He lost a number of places before the car got going again and rejoined near the back. This promoted Ransley back to fourth and he was quickly in the mix for the lead when the three leaders went three abreast into turn one, compromising their own speed in the interest of places. The order at the exit of turn one remained unchanged, but Ransley was a lot closer.

Also going well was CareVets racer Ryan Wood, continuing his improvement in his first season of car racing after a successful career in karts. He had Ransley in his sights and would be a thorn in the Miles Toyota driver’s side for the remainder of the race. That battle, which also had Richard Peasey in close proximity had also been joined by Brock Gilchrist in the NEXUS Logistics car as the field once again put on some fantastic side by side racing and nose to tail slipstreaming down the long Teretonga straight.

A poor exit on the final corner of lap 10 slowed second placed Stewart just enough and Vodanovich needed no invitation to put his car on the inside at the start of the straight and use his better drive – and a bit of the grass – to get by. Immediately after passing him, Vodanovich set off after Robotham and the two were able to build a lead of a few car lengths on the chasing pack, who were still dicing gard for third.

The group became five after Peasey was forced into the pits and Gilchrist dropped off the lead pace and at the flag it was Robotham – just – from Vodanovich, with Stewart holding off Ransley and the impressive Wood to take the final step on the podium.

The final race of the weekend went to Vodanovich who made the most of a blistering start to lead Robotham out of the first turn.

For three quarters of the 20 lap encounter he defended a small lead before stamping his authority on the race to win by almost one and a half seconds. “I had to work hard there and I wasn’t sand bagging,” he said. “I was pushing and once we got the lead I felt a bit more comfortable and relaxed in the car and was able to maintain the gap and build on it a little towards to the end.”

Robotham had to be satisfied with second place in the race, but the round win with two firsts and a second propelled him to the top of the points after three rounds of the championship.

Afterwards, he reflected on a very solid weekend which put him back on top of the points table in the closely fought championship. “We found the problem with the car and tuned it up a bit after Highlands,” he said. “It was definitely handling better here. I just couldn’t stay with them down the straights and that’s where Peter was quicker. I was glad in that last race to pull away from Jaden in the last couple of laps.”

The championship now takes a brief pause before resuming at the New Zealand Grand Prix meeting which will be held at the Circuit Chris Amon, Manfeild over the weekend of February 15th-16th.