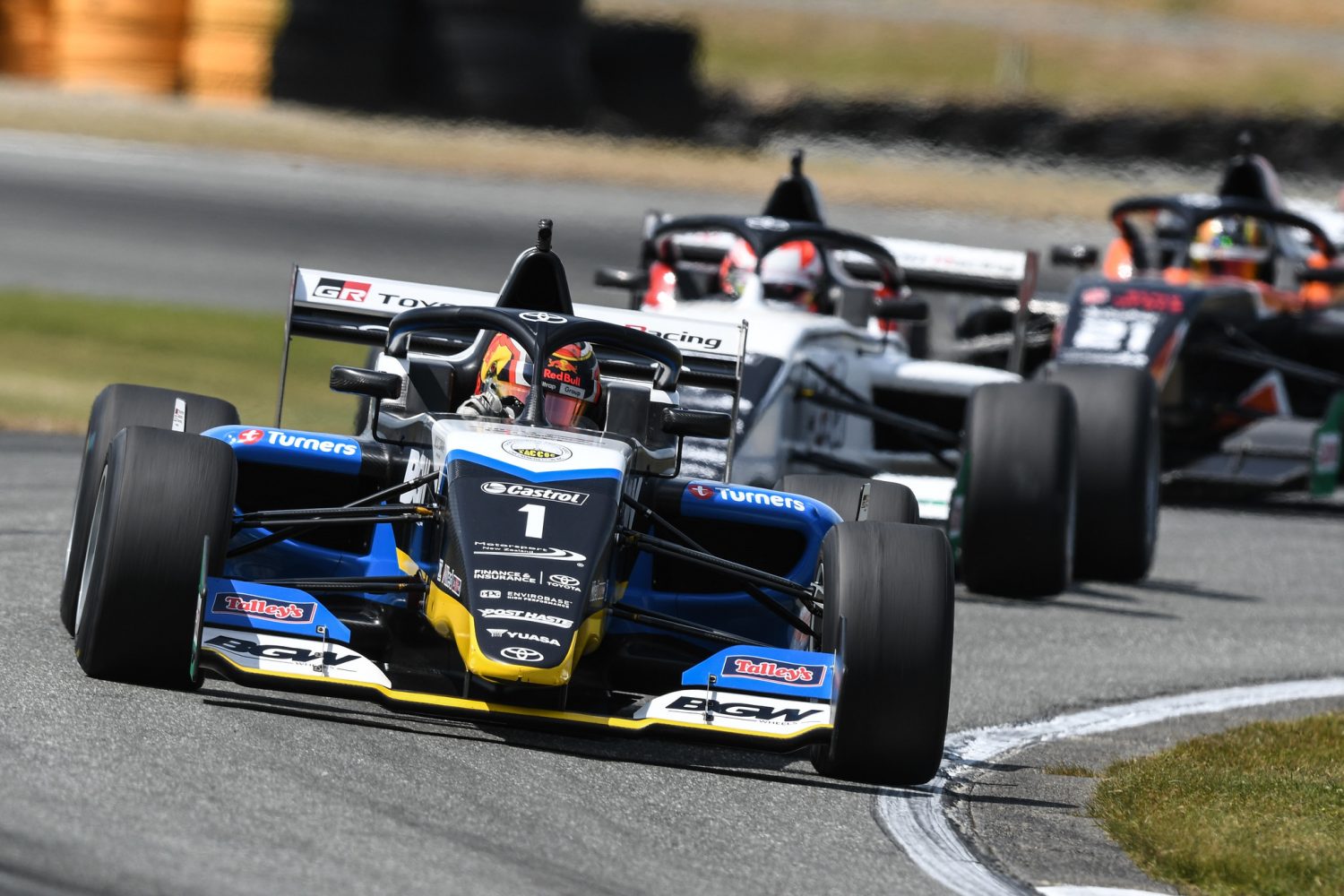 The Castrol Toyota Racing Series continues this weekend with the Denny Hulme Memorial Trophy meeting at Hampton Downs, the first round of three in New Zealand’s North Island, and the pressure will be on the reigning champion Liam Lawson to build on his narrow points lead.

After a weekend which produced three different winners across the three races – Caio Collet for mtec Motorsport engineered by R-Ace GP, M2 Competition’s Emilien Denner and his team mate Lawson, it was the Kiwi who left Invercargill with an 18 point advantage in the championship over Igor Fraga, with Grégoire Saucy sitting third in the standings.

Although he doesn’t have a race win to his credit after two rounds, Fraga – the e-Sports maestro when he’s not racing cars for real – has staked his claim as the biggest threat to Lawson. His pursuit of the champion in the feature race at Teretonga, which pushed them both well clear of the field, was relentless and a win is likely to come very soon.

Last year Lawson lost the lead of the championship over the corresponding weekend in the championship with a crash early on that badly affected his weekend and handed the initiative to Marcus Armstrong. He’ll be hoping for better luck this weekend at a circuit he knows very well.

Another interesting aspect of this year’s championship – in part due to the whole field having a brand new car to learn and understand – all four teams in the championship have shown form and have drivers that have or can win.  Fernando Alonso protégé Franco Colapinto has been fast and consistent in his Kiwi Motorsport-run car. German Lirim Zendeli is rapidly getting his car to his liking as well and with Stephen Giles in his corner helping him hone his style and the set -up of the car, he could spring a surprise or two this weekend in the North Waikato.

Youngster Tijmen van der Helm, who has been testing during the series while his rivals have raced, turned 16 last Sunday and will get his chance in qualifying and race environments for the first time this weekend.  He’s been quick in the testing he has undertaken too, so might be another one to watch for Kiwi Motorsport.

It all begins with testing sessions on Thursday and Friday before the race weekend commences with qualifying on Saturday morning. The first race takes place on Saturday afternoon and the results of that – with the twist of either a reverse top six or reverse top eight thrown in for good measure – denote the starting line-up for the Sunday morning race. There’s a second qualifying session on Sunday morning too and that will form the grid for the longer feature race on Sunday afternoon. The winner of that will lift the Denny Hulme Memorial Trophy, which incorporates a marble plaque presented to Denny for his 1974 Argentinian Grand Prix win.

Sadly, the championship will be without the only female racer in the championship – Chelsea Herbert – who had to withdraw after injuring her back at the start of Saturday morning qualifying last weekend.