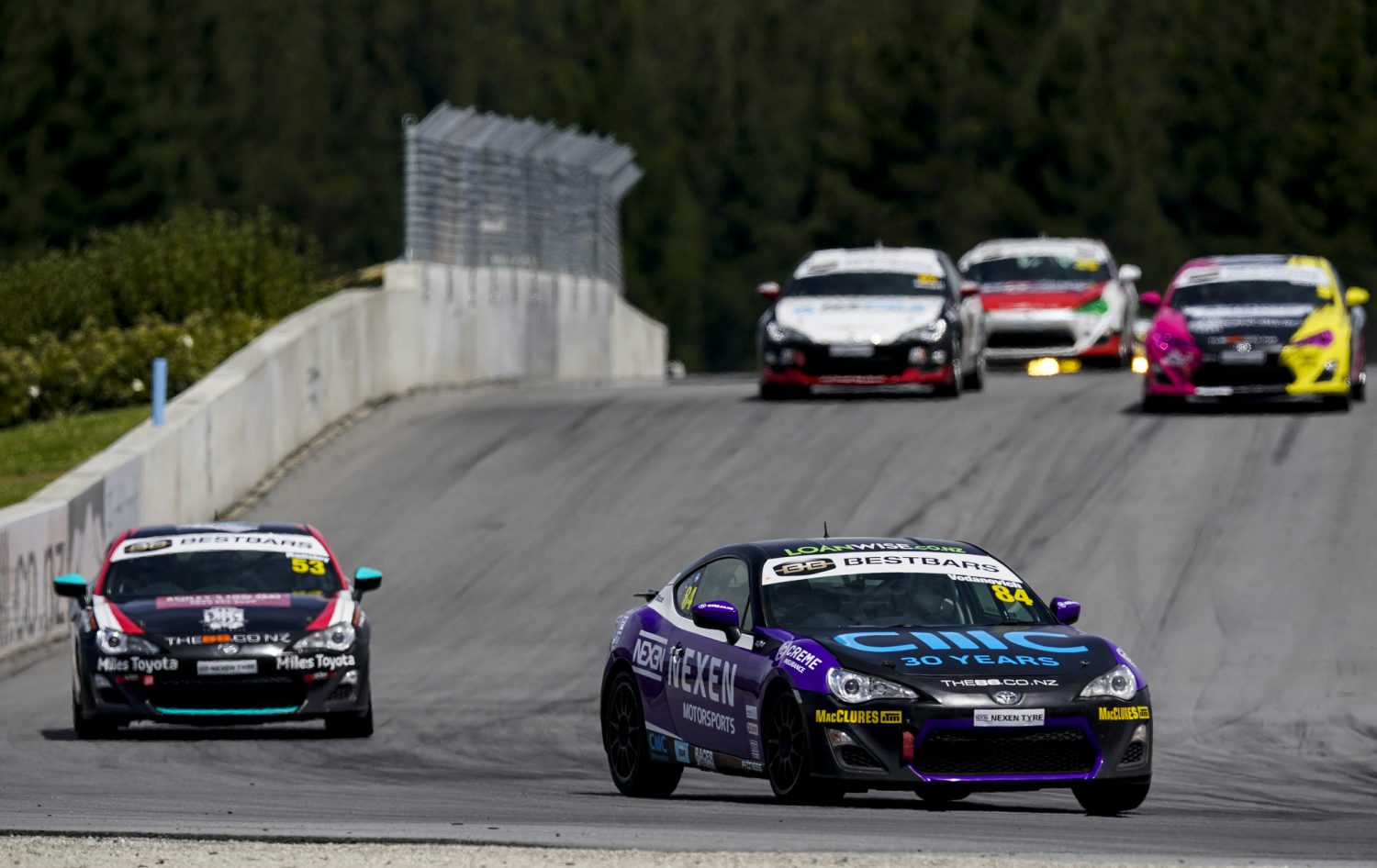 Peter Vodanovich made it two from two in the Best Bars Toyota 86 Championship at Highlands Motorsport Park with a win in the second race of the weekend.

Once again Vodanovich enjoyed a fantastic race long tussle with Jaden Ransley but came through from third on the grid to win. Ransley made a mistake mid race letting Peter through into the lead, but then fought back to mount some serious pressure on Vodanovich in the closing stages. Peter managed to hold on for another victory in the closely fought championship.

“I had a good start off the line and managed to get past Connor quite early, which is what we needed to be able to stay with Jaden as he’s really fast around here as well,” he said afterwards.

“We were maintaining the gap with Jaden, and I was trying to put some pressure on him. Eventually he made a mistake which he doesn’t make often. I was quite surprised how fast he came back at me. A credit to him, he’s driving well.”

Pole position man Ransley made a decent enough getaway to lead into the first corner, but all eyes were on Vodanovich as he launched from the second row in the Nexen DTM CMC Markets car, getting a slingshot past front row man Connor Adam in the Pose Haste car and immediately setting off after leader Ransley.

Behind the top three the rest of the field got away cleanly. It only took until lap two for the drama to begin however, as Connor Davison made heavy contact with the rear of Richard Peasey’s car and forced both into the pits. Peasey was able to continue but it was the end of the road for Davison in the Highlands Park supported car. Andrew Jackson was also a lap two victim, going off and dropping himself way down the order.

At the front two fascinating battles were developing, one for the lead and one for second, third and fourth. With Ransley and Vodanovich quickly establishing a few car lengths over the chasing pack, it was left to Adam, Campbell Stewart and Round 1 winner Jaylyn Robotham to fight over the remaining place on the podium and fight they did – for the rest of the race. First Stewart looked threatening, but then as the race wore on it was Robotham who was the man with pace.

At the front, Vodanovich’s pressure on Ransley was unrelenting and on lap five it paid off as Jaden selected the wrong gear going into turn three and ended up in the gravel. Vodanovich avoided him and emerged from the corner in the lead, while Jaden was able to drive through and resume. Despite dirty tyres for a lap or two he immediately set off after the new leader and slowly began to real him in.

Try as he might, he couldn’t force any error from Vodanovich, the youngster looking even stronger around Highlands than he did when he won the round in the 2019 championship. The two crossed the line just inches apart, but the flag fell for a Vodanovich win.

The battle for third was just as absorbing, with Robotham first despatching Stewart and then engaging with Connor Adam. With one lap to go he overcooked it and passed Connor off the track, and showing great maturity quickly redressed the advantage. Despite the mistake he gathered himself up in the Eastern Performance Centre car and got stuck in once again.

As the last lap unfolded he got alongside Adam heading towards the chicane and in one of the best passing moves of the championship, dived down his inside heading into the chicane before the bridge, holding a high speed slide and emerging in front. He crossed the line third and gained valuable points in his championship challenge.

“I braked at my braking marker which is probably a bit deeper than his,” he said. “I got on the ABS and if I didn’t get out of it, I would have smashed into the back of him. I cut the track and let him back past. I went for the move again and got it done.”

Adam came home fourth after another solid run with Stewart continuing to impress in his second season of Toyota 86 racing with fifth.

Elsewhere Just Allen had a good scrap with Ryan Wood which eventually went the CareVets driver’s way. They finished in seventh and eighth behind Brock Gilchrist in the NEXUS Logistics car who had a lonely drive to sixth. Aussie based English racer James Wilkins had his best race in the championship so far to finish ninth with the top ten rounded out by Brayden Philips in his Carters Tyre Service car.