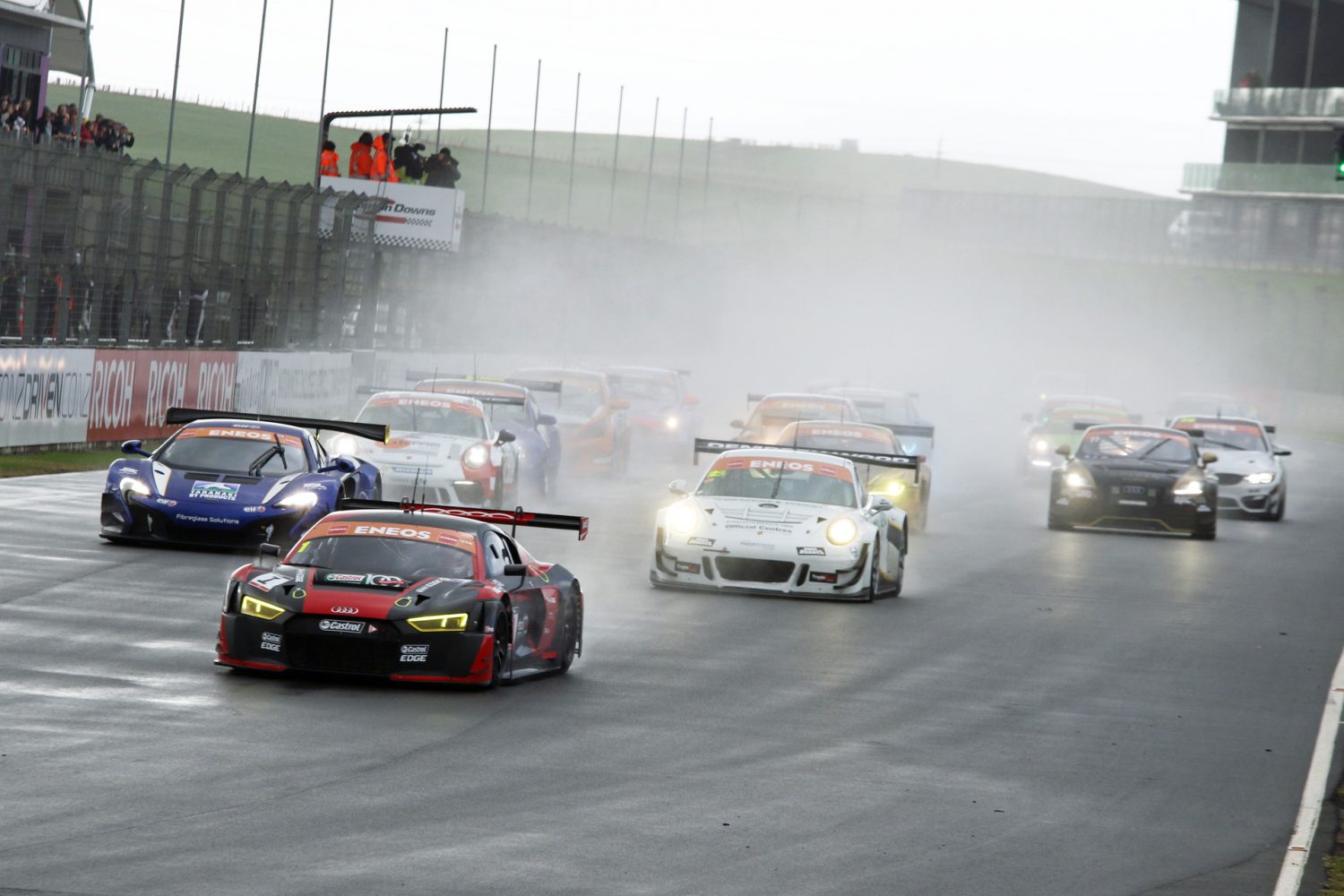 There was sweet revenge for their Pukekohe disappointment for Jonny Reid and Neil Foster as they dominated the final round of the ENEOS North Island Endurance Series Three Hour championship at Hampton Downs.  But it was Glenn Smith and John De Veth who cruised home in the challenging conditions to lift the 2019 title.

In the One Hour race and championship it was Matt Whittaker who ruled the roost in his Porsche.

Audi R8 LMS GT runners Reid and Foster reigned supreme in very challenging wet-damp-dry conditions, with Reid’s opening stint in the car one of the best in the championship history as he stormed to a lead of two laps before the pit stops.

Having a win and a second place in the earlier rounds, the Taranaki duo of Smith and De Veth were odds on for championship success regardless of what Reid and Foster could do as long as they stayed out of trouble and finish high up, and that’s exactly what they did coming home second.

“A win in the series is really good,” Smith said. “I don’t think anyone was going to catch Jonny Reid in the wet. It was phenomenal. I just had to watch him keep coming past me. We had wet tyres on, as soon as it dried out we lost pace. They did hang in there the whole way through. I’m rapt with the car. It didn’t miss a beat and was perfect.”

Third and completing the podium after a solid run were John and Dan Udy in their earlier specification Audi R8.

Connal Dempsey and John Penny’s championship hopes disappeared in a scary accident late in the race when a flying Penny was clipped by Noel Anderson’s Honda Civic. The Porsche spun and was unable to continue but Anderson, the oldest driver in the race, lost both braking and steering after the contact and ploughed into the sand and into a tyre wall at an alarming rate. The Civic struck the tyres hard and went high into the air before coming to rest in the sand. A visibly shaken Anderson took a while to get out of the heavily damaged car and headed off to the medical centre for a check-up, otherwise none the worse for wear.

Matt Dovey and Jono Lester, both guesting in the unique Hyundai SuperTourer, impressed with both good speed and a solid strategic approach to the race. Dovey made the most of his opportunity and kept the car in the hunt in challenging conditions, before Lester rang its neck for the second half of the race, stopping late on for slicks and ultimately racing through to a hugely impressive fourth and a win in Class GT/B. Champions in that class were Rob Bolland and Shane Helms in the Audi TT, coming home in seventh at Hampton Downs.

A great battle between Gene Rollinson and Jorden Michel’s Hyundai and the Honda of John McIntyre and Matt Penney in the TCR dominated Class 2 was resolved in the dying moments when Rollinson, on fresher tyres, found a way past McIntyre. The duel lasted throughout the race and bodes well for the class, which will be the next big thing in New Zealand circuit racing next summer. Greg Brinck and Stephen Harrison made it home at Hampton Downs after a troubled race but had the bonus of taking Class 2 overall in their Audi S3.

In the ENEOS One Hour series, a fabulous drive for Matt Whittaker in his International Motorsport run Porsche 991 netted race and championship victory after a race where much of the hour was spent behind the Safety Car after incidents caused by the treacherous conditions peppered the series finale.

The worst of many incidents was a heavy hit into the pit straight outside wall for Ford FG V8 Ute racer Simon Ussher, but thankfully it was only the car damaged in the offs and spins were endless, however.

Whittaker though, was comfortably the fastest man in the field and looked like the contender who wanted the title the most as he scythed his way back to the front after his compulsory pit stop.  Pukekohe winner and Whittaker’s major challenger Brock Timperley drove well again, but had no answer to Whittaker’s pace, at time two seconds a lap better than the rest of the field.

Timperley took second in the title chase, just ahead of Andy Duffin in the popular triple rotor Mazda, a factor in the race at Hampton Downs and a fantastic addition to the series for Duffin’s first season of endurance racing.

The best of the best on both the North and South Islands will return to Hampton Downs for the New Zealand Endurance Championship finals on November 16th.