Reid/Foster make it two from two for IMS 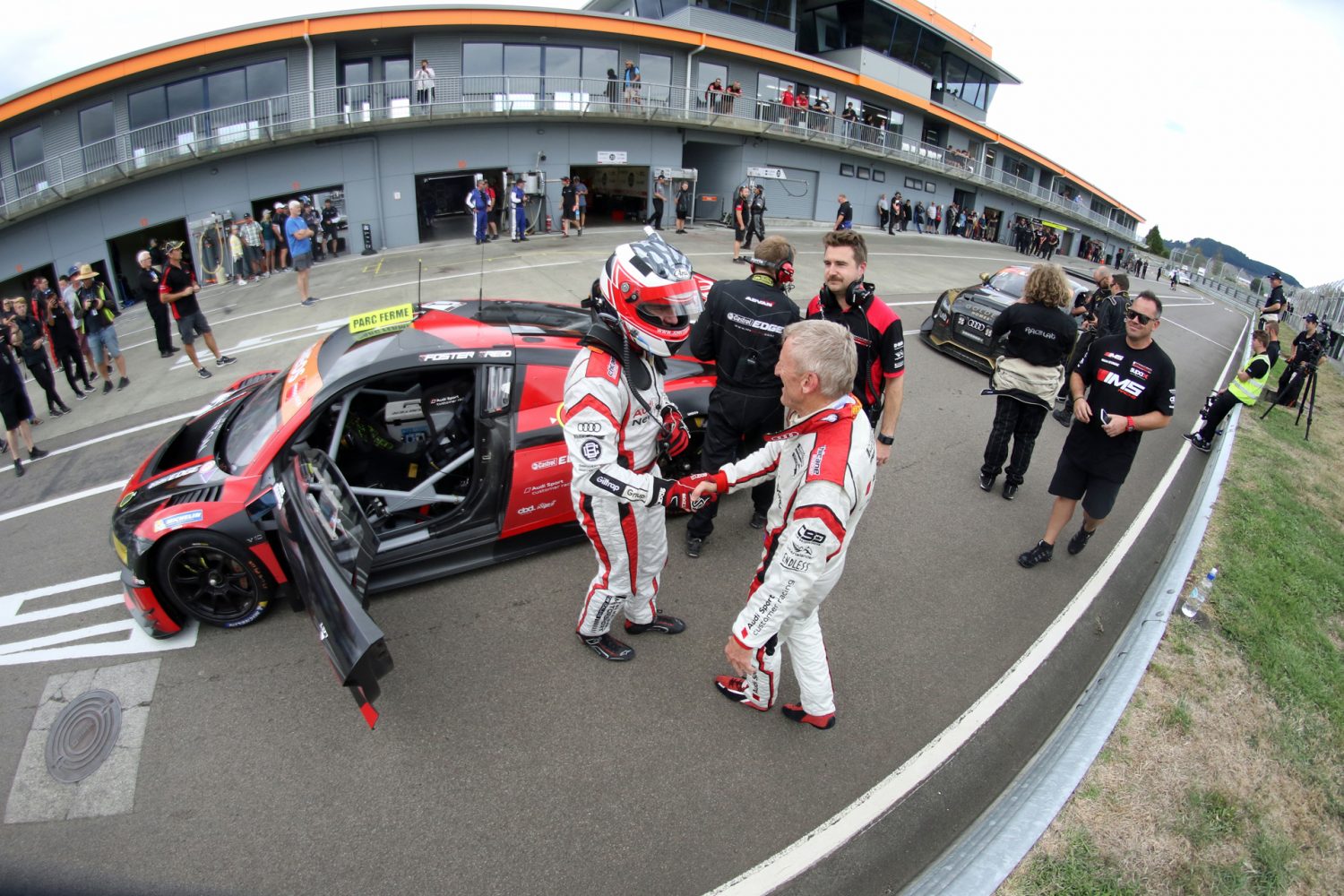 It was a case of two wins from two races for International Motorsport after the team secured back-to-back wins in the ENEOS North Island Endurance Series season opener.

After an impressive performance by Matt Whittaker in the morning’s ENEOS One Hour encounter, a dominant performance by Jonny Reid and Neil Foster in their Audi R8 LMS GT3 rounded out an almost perfect day for the team.

The spectacular McLaren 650S GT3 of Glenn Smith and John De Veth came home in second, the crew doing what they could to contain the Audi and clawing some time back in the latter stages of the race before the Audi pitted and Reid returned to the track, stamping his authority on the race and winning by nearly a minute. De Veth had grabbed the lead for a few laps after Foster stopped to hand over to Reid, but once was back in the saddle Jonny made light work of the ten second deficit to De Veth and was on his tail within three laps.

A mistake by De Veth where he ran wide and out into the marbles allowed Reid up the inside and he duly took the lead from which point he simply sprinted away from the McLaren to extend the lead to 56 seconds at the flag.

“We had plenty of pace and it all turned out ideal,” said Reid afterwards. “To take the win here is sensational, it’s what we came to do. The car performed faultlessly in the last stint. We were working on the balance of the car through the whole race with tyre pressures and everything went in the right direction. That last stint was just phenomenal. It was such a pleasure to drive. I’m elated right now. It’s good to do it with Neil too.”

Foster’s stint was challenging as he struggled – like most racing on the track on Saturday – with elevated tyre degradation. “I was a bit tired there towards the end when the tyres started to go off,” he said. “It was a sensible drive and I think and we just kept it clean and concentrated on our own pace.”

Foster and Reid were top of the charts in the GT-A class and overall with De Veth and Smith second in class. Third in class was the Porsche of Conal Dempsey and Andrew Fawcet – they finished fourth overall.

Third overall and first in GT-B was the Holden TLX of V8 Supercar ace Andre Heimgartner and Lance Hughes. Both drove exceptional stints, Heimgartner particularly impressing with his full on attack style in the second half of the race.

Class 1 victory – and a mightily impressive fifth overall – went to Shane Helms and Rob Bolland in their Audi TT RS VLN, arguably one of the fastest front wheel drive racing cars in the world today and a fantastic addition to the New Zealand motorsport scene.

Two time world touring car champion Paul Radisich was out racing again, this time guesting alongside Ken Baigent in his V8 BMW. They made the finish in tenth after a solid run.

Porsche ace Matt Whittaker won the opening one-hour race of the ENEOS North Island Endurance Series in his last-gen Porsche 991, overcoming a solid challenge from Nick Chester’s monster Holden Commodore VX to take honours in the first round of this year’s championship at the Bruce McLaren Motorsport Park, Taupo.

It was advantage Chester in qualifying with the iconic Holden blasting round in an impressive 1.28.379 to eclipse Whittaker in his new charge by nine tenths of a second. At the start, however, and with both cars on full tanks, it was Whittaker and the red Porsche who took the initiative from the rolling start at turn one and led out of the corner after a brave lunge down the inside by Whittaker.

Chester was far from ready to give up however and having harried Whittaker for the entire first lap, he managed to muscle his way past don the straight after the duo had fought out the turn 11 sweeper side by side. From there Chester established a narrow margin before pitting for his compulsory pit stop, which allowed Whittaker to grab the lead back.

As the race entered its final few minutes, Whittaker was one of the last to pit, and with a great pit stop emerged from the pit lane still some seven seconds to the good ahead of Chester. The fight went all the way down to the flag, but try as he might and with traffic a constant challenge, Chester had to settle for second just five seconds away from winner Whittaker.

“I’m happy, very happy, but by we won that one by the skin of our teeth I think,” said Whittaker after the race.  “We almost had a massive crash halfway through the race, and I’m pretty keen to go back and look at the video how we managed to save it. The car was a bit of a handful actually. I had a lot of understeer. We probably didn’t get the right set up for the race but we thought we’d try and tune it so it had plenty of rear grip, but it ended up being the front that was an issue.

“But it was a great battle. That thing is a beast and Nick is a great driver. It’s great to tussle with someone who has a great awareness of their surroundings. It was a lot of fun.”

An impressive third was Andy Duffin making his New Zealand endurance racing debut in his familiar flame-spitting triple rotor Mazda RX7, while Simon McLennan was fourth, having kept Duffin in sight for much of the early part of the race. Jarrod Owens completed the top five, after a great drive from the back of the grid.