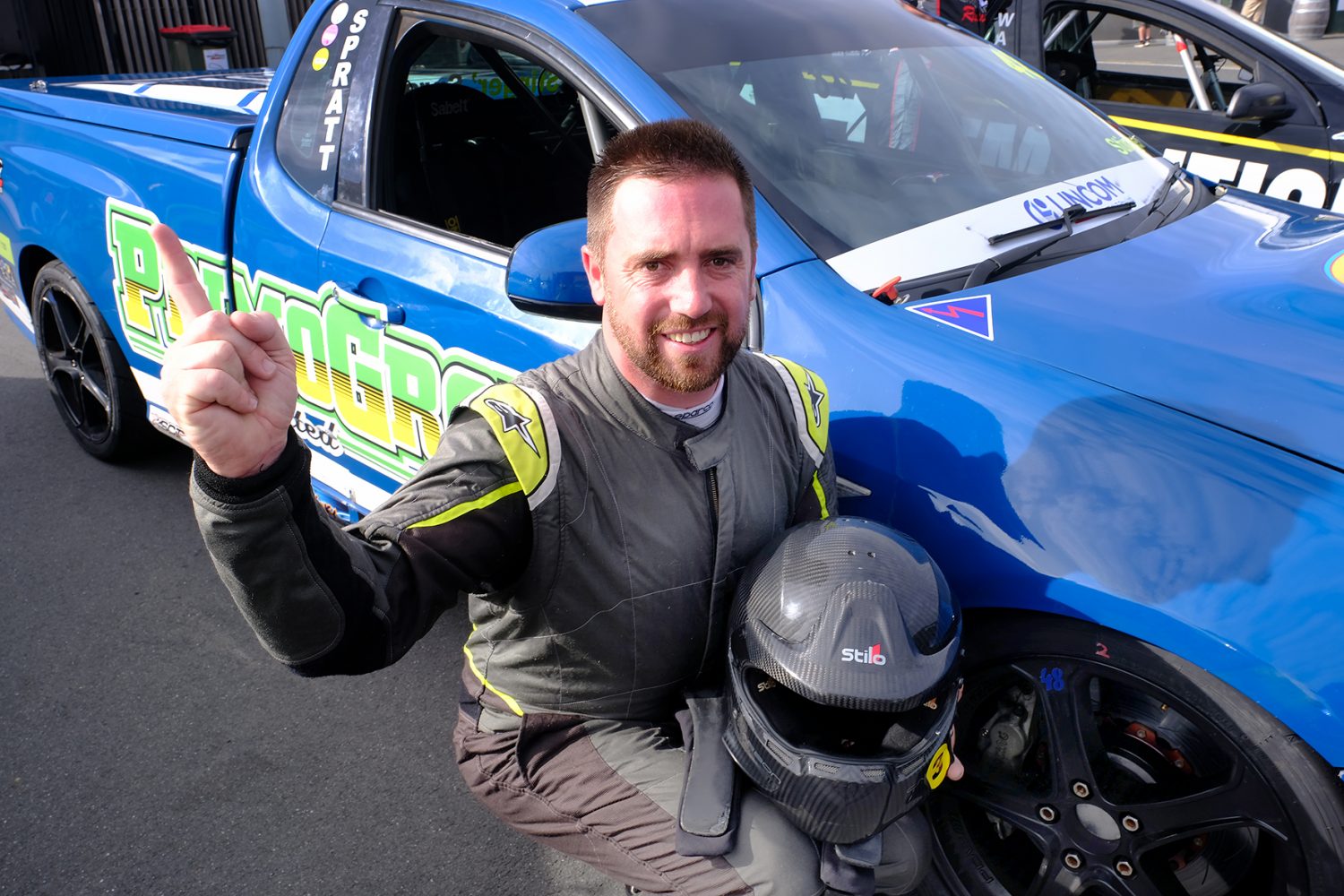 Matthew Spratt won the NZ V8 Utes title at Hampton Downs this weekend after a consistent season over four rounds in which he was the man to beat throughout in his Primogrow Ford Falcon run by veteran utes operator Jake Stoneman.

Second, after a superb final round highlighted by two race wins – was former champion Paul Manuell in the Superfreight Partmaster Holden while long time ute racer Peter Ward in the familiar Ward Demolition Holden took third in the championship fight.

Paul Manuell converted his outstanding qualifying speed to a comfortable race win at Hampton Downs on Saturday as Andrew Porter narrowed the gap to series leader Matt Spratt with two more races on Sunday left in the championship.

Manuell made a superb start in his Superfreight Holden and never looked back, stretching out to a very solid early lead early on and with only Peter Ward in the Ward Demolition Holden able to keep him remotely in site over the first half of the race.

The fastest man on track, however, was Andrew Porter in the PorterHire Holden and once he had got through and beyond the battle for fourth, fifth, sixth and seventh he was quick enough to eat into Manuell’s lead as he consolidated second place in the race. That second place in the race also converted into enough points to leapfrog Glen Collinson in the DNA Paints in the title race, and both finished ahead of series leader Matt Spratt in the Primogrow Ford Falcon. Spratt, under the weather with illness, was happy to finish the race in one piece and maintain a series lead.

The best battle of the race involved Porter, Collinson, Brett Rudd in the Pallet Supplies LOSCAM Holden, Alexandra Whitley in the LDV Vans Holden, Geoff Spencer in the Coresteel Buildings Holden and Spratt. Front row starter Rudd didn’t make the best of starts and fell into the battle pack and the group duelled throughout. Porter was quick enough to work his way through the battle and Collinson was too. But Glen had no answer for Porter’s speed and could not catch Ward, so ended up in fourth.
Rudd hung on to fifth after a spirited fight with Spratt, while Whitley remained a part of the fight but had to settle for seventh. Geoff Spencer took eighth, with Simon Ussher going well to hang onto the group and take ninth. Jeff Kernohan was top Ford Falcon BF finisher and rounded out the top ten.

Matthew Spratt put in his best drive of the season in the second race at Hampton Downs to seal the 2018-2019 V8 Utes title in winning style.

Spratt – starting from fifth on the grid – scythed his way to the front before unleashing a series of blistering laps in the Primogrow Ford Falcon FG to leave the field behind. Ahead on points going into the race, his haul for a dominant win was enough to lock away the title after a fast and consistent year.

“I started three years ago and have been with Jake and his team ever since,” said a delighted Spratt afterwards. “It’s been a season where I have tried to be focussed and consistent and pick my moments. I’ve learned a lot over the past couple of seasons and it’s amazing to win. I’ve got a lot of people to thank and it’s pretty special. We’ve got a new addition coming along in the family and now a big trophy as well.”

Any chance Andrew Porter had in his late bid for the title evaporated on the first lap of the race when contact with Paul Manuell at turn 2 left the PorterHire Holden severely wounded, with damaged steering and a puncture. Porter continued circulating to ensure he took some points for a race finish, but it wasn’t enough to stay in touch with Spratt in the battle for the title. Glen Collinson in the DNA Paints Falcon GF faired a little better, ending the race in fifth place again falling short of what was needed to prevent the title being decided.

The race wasn’t without its drama. Simon Ussher’s Falcon FG shed an axle in spectacular style off the start line, bringing out the Safety Car. Jeff Kernohan defended well early on as the faster cars closed in but the battle pack of Spratt, Peter Ward in the Ward Demolition Holden, Alexandra Whitley in the LDV Vans Holden, Collinson and Spratt all found a way through.

Saturday winner Manuell’s drive was also uncompromising and impressive as he battled his way through from tenth on the grid to second place at the end. Ward ended up in third having defended second as long as he could before Manuell found a way through. Whitley took a solid fourth place, Collinson fifth, Brett Rudd sixth in the Pallet Supplies LOSCAM Holden with Jeff and dad Dave Kernohan next up in seventh and eighth in the KCH Ford Falcons – the best combined result for the family team for some time.

Series front runner Brent Main in the Ryco 82C Ford and Stu Monteith in the Trade Freight Holden rounded out the top ten.

Paul Manuell signed off the V8 Ute season in style with a lights to flag victory in the final race of the 2018-2019 season at Hampton Downs.

Manuell, who started from pole position having secured the most points over the first and second races, got the hole shot at the start and had a couple of car lengths as the field streamed into the first turn, with the pack led by Peter Ward in the Ward Demolition Holden, Alexandra Whitley in the LDV Vans Holden, new champion Matthew Spratt in his Primogrow Ford, Glen Collinson in the DNA Paints Ford, Andrew Porter in his PorterHire Holden and Geoff Spencer in the Coresteel Buildings Holden all in hot pursuit.

Manuell produced a very quick first lap to take a comfortable lead in the early laps, and it was Ward who led the charge in second, initially fending off Whitley before Spratt loomed large in his mirrors. Spratt waited a couple of laps before pouncing, taking second and then settling into his own sequence of fast laps.
Behind Ward in third, the focus was on Collinson and Porter but any hopes they had of finishing in the runner up spot in the championship was lost when heavy contact of the front of Collinson’s Ford and the rear of Porter’s Holden at the downhill sweeper sent Andrew into the gravel and Glen into the pits with a squashed front bumper preventing airflow to the radiator.

That meant a Safety Car while Porter’s car was dragged back onto the track. He was able to keep going and as the field got the green light with two laps to go Manuell again made the best getaway while behind those two Whitley got a fantastic run down the inside of Ward and was able to hang on for a few corners and convert it into third, leaving Ward in fourth with a very fired up Spencer biting his ankles behind in fifth.

As Manuell took the flag the order of the top five remained unchanged, though further back contact between Simon Ussher and Brett Rudd sent the United Freight Ford into a huge spin ion the exit of the final turn. That moment allowed Jeff Kernohan to grab sixth in the KCH Ford Falcon, coming home ahead of Rudd’s Pallet Supplies LOSCAM Holden in seventh, David Kernohan’s KCH Ford Falcon in eighth and Brent Main in the Ryco 82C entry and Stu Monteith’ s Trade Freight Holden rounding out the top ten for the second race in a row.