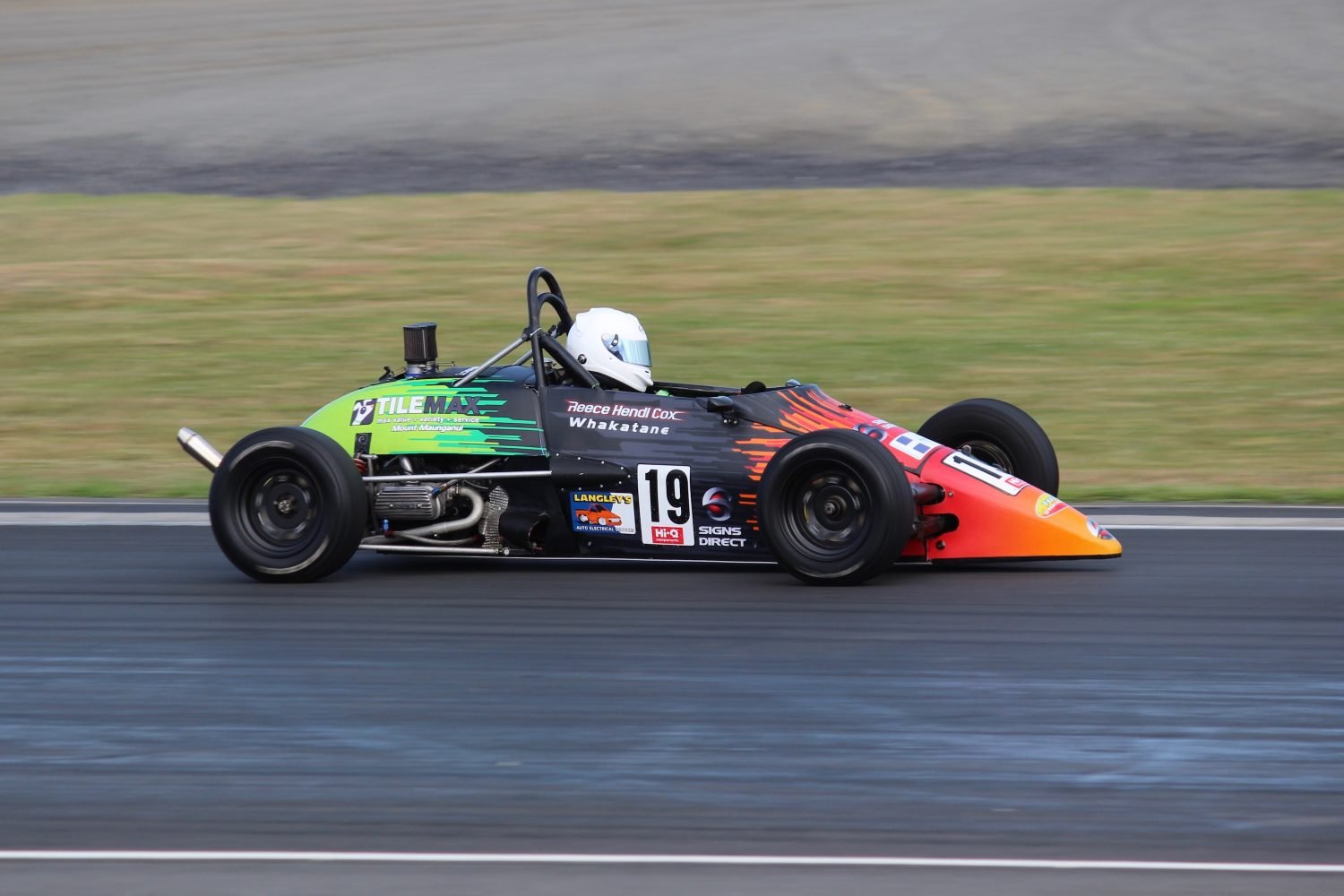 Saturday morning’s 15-minute qualifying session was closely contested as expected in Formula First, with Hendl-Cox taking pole over Symon by just 0.054s. The standout effort of the session was Botany student Amy Smith, 17, who set the third fastest time just a further 0.024s slower than Symon.

The first of three eight-lap races on Saturday afternoon was labelled a ‘fizzer’ after a lengthy safety car period for a minor incident between Auckland’s Kyan Davie, 13, and Palmerston North’s Dave Scammell put a stop to the typically action-packed Formula First racing. Hendl-Cox took the win over Symon and Smith who finished second and third respectively.

Sunday mornings race was a similar affair with Hendl-Cox leading home Symon for finish first and second. While the front two battled hard, the fight for the podium was fierce in the first half of the race.

Taranaki rookie Thomas Boniface 15, along with Aucklander’s Liam Foster, 22, Smith, 17, and Billy Frazer, 15, fought hammer and tong to decide the final podium place. As the chequered flag fell, they crossed the line four-abreast with Frazer edging out Boniface followed by Foster and Smith.

SpeedSport Scholarship driver Ronan Murphy, 17, from Havelock North delivered a late race charge to move from outside the top ten to finish seventh in a dead-heat with Epsom’s Taylor Hurst, 16.

The final race on Sunday afternoon saw Hendl-Cox take the win, this time without challenge from Symon who seemingly lacked pace compared to the new championship leader.

The battle for third heated on the final lap as suddenly four cars were vying for the position. Boniface, Foster, Frazer and Smith ran four wide over the line to finish third, fourth, fifth and sixth respectively.

Hurst and Murphy were the next battle pack, switching positions and exchanging drafts again to try to catch the fight for the podium. Hurst narrowly edged Murphy to the line by 0.097s to finish seventh and eighth respectively.

Hendl-Cox now leads Symon by 21-points in the championship. Frazer sits third, 108 points from the lead with Foster fourth and Smith fifth. Boniface’s strong weekend moved him ahead of Murphy for the rookie of the year points.

“It was pretty tight up the front!” said Hendl-Cox.

“Chris and I went wheel to wheel a couple times but we managed to get away with it!

“The championship lead is great but as it showed at Pukekohe it can change so quickly, so it will be all about consistency to maintain the lead.”

The next round of the NZ Formula First Championship takes place at New Zealand’s headline domestic motorsport event, the New Zealand Grand Prix at Manfeild Circuit Chris Amon in Feilding on February 8-10.