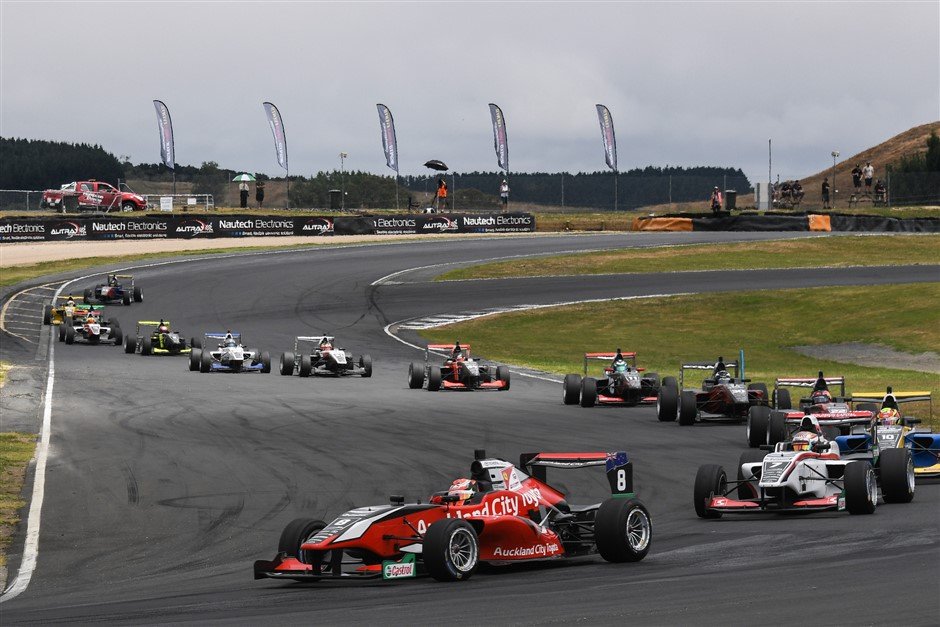 AMarcus Armstrong dominated the Saturday afternoon race at Hampton Downs today, not only clawing back the points deficit to rival Liam Lawson after another dramatic race, but taking a narrow lead in the race to the Castrol Toyota Racing Series title.

The race finished under the Safety Car but it would have made no difference to the chasing pack had there been race time left. Ferrari Junior Armstrong was long gone from the early laps of the race and reflecting his margin over the field in qualifying in the morning, was significantly quicker throughout the race, particularly through the mid race laps when he was able to increase the margin to Raoul Hyman and Liam Lawson in second and third by three tenths of a second per lap.

“I just pushed the whole way and we were quite fast,” explained the delighted Kiwi, who now sits five points ahead of Lawson in the title chase. “I was a bit worried at the end when there was a safety car with two-three laps to go. I didn’t want a safety car restart with one lap to go. In the end we got the win and the points and we go again tomorrow. I think we can do the same tomorrow. The car is easy to drive at the moment, it’s fast and I feel quite comfortable.”

Starting from pole position, Armstrong immediately stamped his authority on the 20 lap race, out-dragging front row sitter Hyman easily as the field sped off towards Turn 1. Hyman’s getaway also left him vulnerable to a fast starting Lawson from row two. A pass for second looked on for the young Kiwi but some robust defence from Hyman put paid to that and forced Liam to lift off and get into the sights of the midfield pack behind, headed by Artem Petrov, with Petr Ptacek, Lucas Auer, Esteban Muth and a fast starting Jackson Walls all in hot pursuit – the young Australian getting better and better in each Castrol TRS race after joining the series at Round 2 a week before.

A dive down the inside of Petrov by Ptacek at the downhill sweeper came to nothing for the Czech racer, as he climbed over the back of Petrov, spinning both cars out of the race. Brendon Leitch meanwhile came unstuck at the last turn trying to make a brave outside pass on the fast right hander, running out of road and going for his second wild ride across the gravel in as many races. Again he recovered without any obvious damage and rejoined the field in 13th.

With both cars of Ptacek and Petrov unable to restart, a quick red flag allowed prompt recovery of the stricken cars and the Safety car set off again and lead the pack around for a couple of laps before releasing them for the restart with 16 laps to go. Lawson made a great getaway and attacked Hyman on the inside of turn one, mounting the kerbs and getting close to the inside wall as he attempted a daring move. Hyman was wise to it though and for the second time in the race Lawson’s challenge was repelled and he settled back into the slipstream of the UK racer.

Catching the eye mid-way through the race was Walls, who made a great pass on Muth to take fifth before setting off after Lucas Auer, who sat comfortably in fourth but unable to make any real inroads into the three in front. Armstrong again had the hammer down early and opened up his lead to what it was before the race stoppage within two or three laps. He was first inside the 1 minute 1 second barrier and kept it there while the rest were still three to four tenths a lap slower. There was simply nothing Hyman could do and he settled into a defensive mode, protecting second from the advances of an ever-present Lawson.

At the half way mark the running order was Armstrong, Hyman, Lawson, Auer, Walls, Muth, Calan Williams, Dev Gore and a charging Leitch, already up to tenth after passes on Kazuko Kotaka and Petru Florescu.

As the laps counted down, the battle for the minor places was the one providing the most entertainment, with Leitch passing Gore and then setting off after Williams, whom he caught very quickly. Passing however, was a different matter and as Williams backed him up, so Gore and Kotaka were able to tow up to the back of Leitch and create a rapid four car train battling for ninth and tenth.

For two or three laps it provided a great battle but Leitch, frustrated and not helped by understeer, ended up hitting the back of Williams in his attempt to pass him at turn four. There was contact and Brendon lost his front wing forcing him to head for pit lane. Gore continued with damaged rear wing but a significant loss of downforce contributed to a big spin under braking for turn one. Out came the Safety Car but by the time the marshals had extricated him and push started him, there was no time left and the race completed its 20 laps under the Safety Car, Armstrong winning comfortably in the end.

Sunday morning’s first race will feature a grid based on today’s finishing order, with the top six reversed. That will put Esteban Muth and Jackson Walls on the front row.