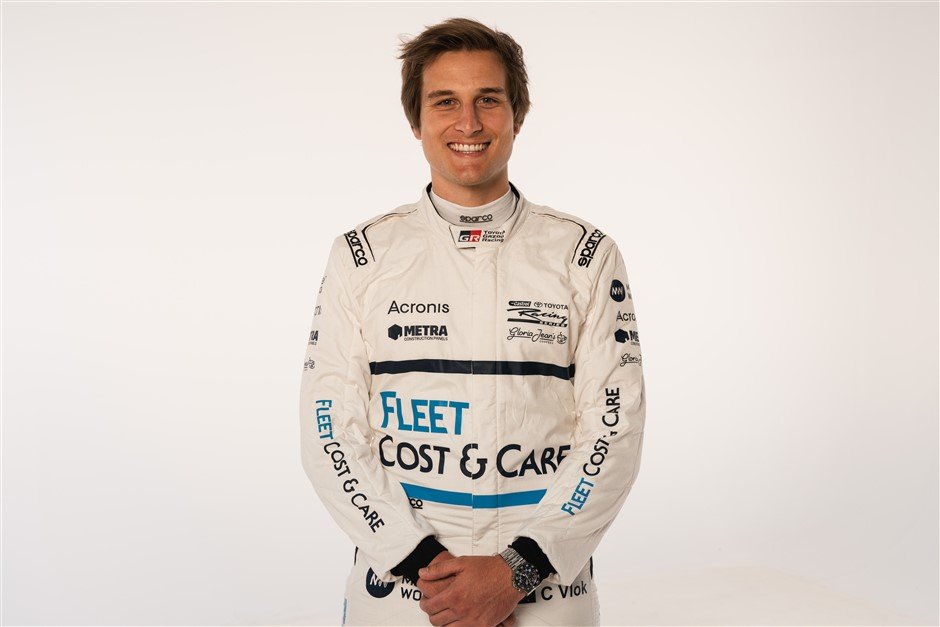 Christchurch based racer and entrepreneur Chris Vlok is the latest driver to sign up for the full 2021 Castrol Toyota Racing Series.

Vlok, 28, will compete in all three rounds of this year’s championship, the first time he has competed domestically for eight years.

Before restrictions were imposed by the global pandemic, he was a frequent international traveller working closely with teams and technology companies in the sports and entertainment sector, setting up strategic deals and technology partnerships with some of the world’s most well-known properties.

These include the Boston Red Sox, Williams Racing and Racing Point Formula One teams, Manchester City FC, Arsenal FC, Inter Milan and many more, He’s also secured a recent deal with TOYOTA GAZOO Racing to support their endurance program through the use of Artificial Intelligence and Machine Learning technology from Acronis.

Alongside the travel restrictions, his major partner, United States-based Fleet Cost & Care is expanding its fleet management software globally in 2021 and a TRS drive created the perfect foundation for the brand’s launch here and for Vlok who has never lost his enthusiasm for racing.

“It’s really an alignment of the stars, everything fitted perfectly for both myself and Fleet Cost & Care’s plans for the next 12 months,” he explained. “With my main partners knowing motorsport through their relationship with Rahal Letterman Lanigan Racing over the past six years and having global expansion plans a high-profile motorsport series like TRS is was an easy choice for us all.”

“Alongside my business interests and aspirations, I’ve never lost my hunger to race and TRS provides a great opportunity for me to step back into a serious car and an ultra-competitive series with close, hard driving. And best of all, without even having to do a long-haul flight to my races for once!

“The new era TRS cars are a lot closer to something you’d find in Europe and is effectively a Formula 3 car now with the latest technology & safety designs taken into consideration, so it’s an absolute pleasure to drive.”

Vlok is no stranger to the Castrol Toyota Racing Series, having undertaken a full campaign in 2012 in the original FT40 TRS car. He also won in the South Island Formula Ford Championship – taking three victories from four races in the 2011-2012 series.

The 28-year-old also has some fairly serious international experience under his belt too, including a season in British Formula 3 in 2013 where he finished second overall in the National Class with one win and six podiums along the way.

He competed in two races in the F3 European Open in 2012, finishing fifth overall in his first outing, as well as a debut F3 outing earlier in the same year at the Clipsal 500 in the Australian F3 championship.

In 2016 he also raced a KTM X-Bow in the Pro class of the Competition102 GT4 European Series with Reiter Engineering, scoring one pole position and narrowly missing out on a maiden win in the two hour endurance race at Spa Francorchamps. Vlok led the entire field after both mandatory pit stops and driver changes with a comfortable lead of almost half a lap before the car suffered a mechanical failure with only two laps remaining.

The past few weeks have been busy for Chris as he has undertaken a rigorous two-month training programme to get himself back in shape for the physical challenges of the high downforce Toyota FT60 car.

“I’ve lost over six kilos already and I’ve been going as hard as I can with my training and preparation to make sure I will be as ready as I can be when the first session begins,” he added.

“I’ve tested the car twice now and have a good understanding of where I need to be physically, and that’s where a lot of my preparation has been directed. Alongside this I have been working closely with TRS engineers to ensure that we are in the best possible position come next Friday. We are looking forward to challenging the unique field that Toyota has put together for this Grand Prix. There are generations of great drivers racing both new and old so it’s going to be a great experience to race against this diverse field.”

As well as Fleet Cost & Care, Vlok will be flying the colours of Global Cyber Protection firm Acronis, a global cyber protection company providing solutions to over 50 sports partners, and one of Chris’ long-standing supporters, as well as local traffic management solutions provider Men at Work, both of whom have just launched new divisions of their businesses into the Auckland region. An increasing number of sports teams are switching to Acronis who recently opened a new data Centre in Auckland, with Men at Work having just opened a new branch in Auckland after successfully servicing the South Island for the past 12 years. Alongside these partners, Vlok is also proudly representing New Zealand company Metra Construction Systems and global coffee giant Gloria Jeans.

“I am really excited to be working with such a great group of partners that all share in my vision and goals toward success and perfection both personally and professionally,” he added. “It has been my goal for a very long time to be able to bring together a unique group of industry leaders like this and it’s extremely exciting to be finally doing so at home in New Zealand.”