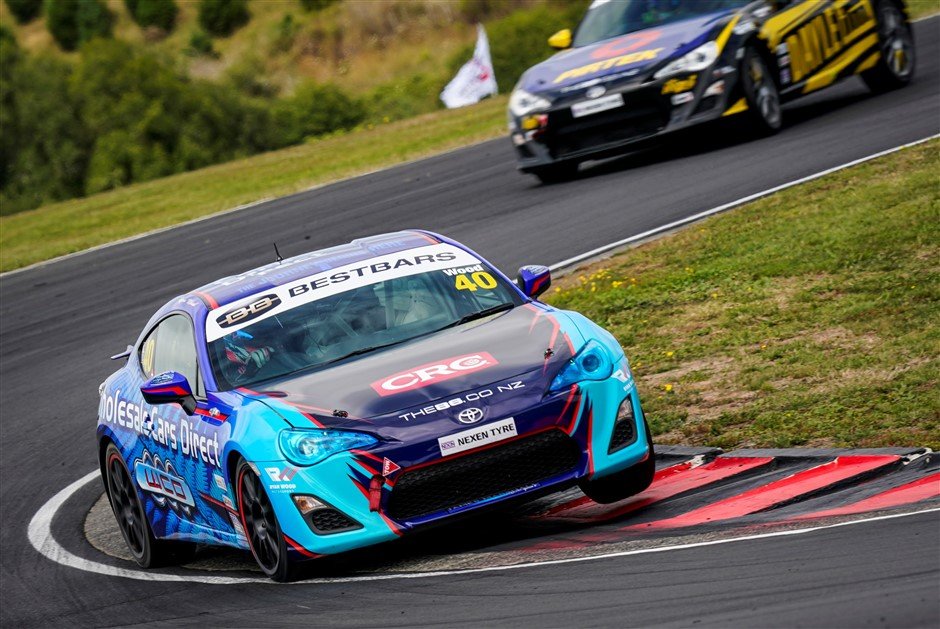 Ryan Wood took his first victory in the first race of the 2021 Best Bars Toyota 86 Championship after a faultless lights-to-flag victory at Hampton Downs.

Wood made the most of pole position and executed the perfect getaway to lead into the first turn. The young gun, starting his second season in the championship, had to resist early pressure from series debutant Rowan Shepherd before gaining an advantage of a few car lengths and cruising home to win.

“It was a hard race,” he said afterwards. “I knew Simon had lots of experience but I managed to hold my own in the changing conditions and the car was fully hooked up when it was dry. I’m stoked to win that one.”

Second after an excellent battle with Shepherd and Brock Gilchrist was multiple New Zealand V8 and endurance champion Simon Evans in the familiar colours of Wet and Forget.

When it started to rain midway into the nine lap race, Evans’ seemed to forget it was wet and his race came alive. He moved from fifth to fourth and came out best to emerge second after Gilchrist and Shepherd almost tripped over each other.

Shepherd filled Evans’ mirrors for the rest of the race and Gilchrist, who was quicker than his close rivals in the dry, was right behind Shepherd. They finished third and fourth respectively after a great battle. Justin Allen held onto the lead group in the early stages, but as their battle intensified he was left to complete his race and take fifth.

Elsewhere in the race, Ronan Murphy was relegated to the back of the grid after his third place position in qualifying for being marginally underweight.  Quickly into his stride he moved from 15th and last on the grid into the top ten.

There was some unfortunate contact with his team mate Christina Orr-West after an ambitious move into the downhill sweeper in his enthusiasm to get to the front, but he did the right thing and allowed Christina to repass. Back into his stride he continued strongly to the flag, and ended up in a respectable sixth place.

Marco Giltrap had a decent race to finish seventh, keeping experienced racers Mark mallard and John penny at bay. They finished eighth and ninth respectively with Alexandra Whitley rounding out the top ten.