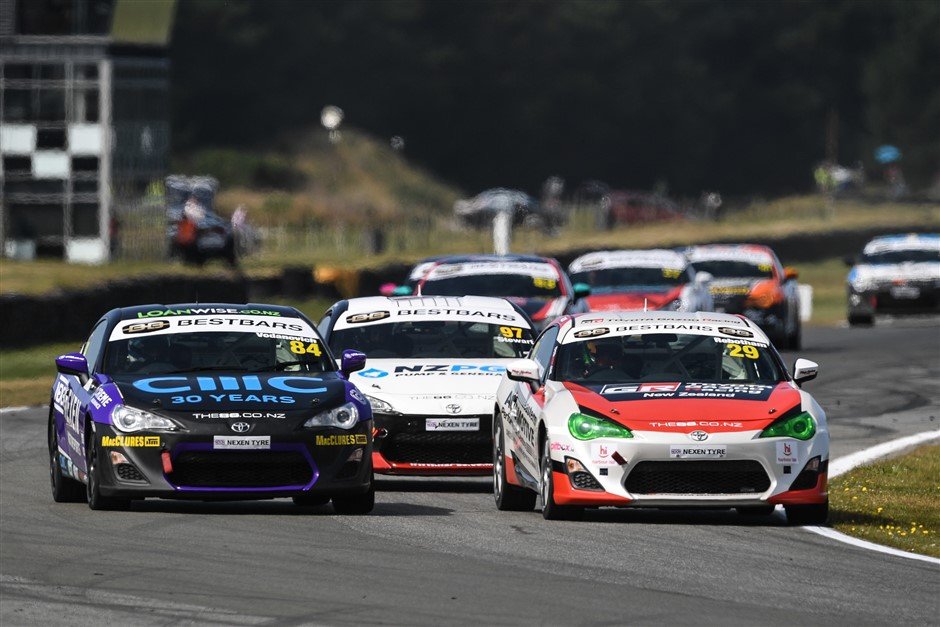 After three rounds of the 2019-2020 Championship – and some of the tightest and most competitive racing the category has ever seen – the Best Bars Toyota 86 Championship arrives this weekend in Manfeild at a key moment in the championship.

With two rounds to go, the race to the title is shaping into a three way battle. One driver from Australia and two from New Zealand will fight it out all the way to the final lap of the final race.

Jaylyn Robotham in his Eastern Automotive supported Toyota 86 has been one of the season’s sensations. Sixth in his home country’s equivalent championship last season and the winner of the V8-powered Asian TA2 championship, Robotham looks every inch a future prospect for V8 Supercars. He won in the NZ championship first time out at Pukekohe Park, got himself into the mix at the technically challenging Highlands Motorsport Park and was the round winner again at Teretonga Park last month.

As a result he has a six point lead over principal Kiwi rival Peter Vodanovich in the championship table, and a 23 point buffer over the other Kiwi in the title race, Jaden Ransley.

Vodanovich has been simply sensational this season so far. A late deal with NEXEN DTM secured his entry in the championship and he made the most of the opportunity. He got his championship off to a solid start at Pukekohe, but was almost invincible at Highlands, winning two of the three races over the weekend and only losing the last one after a last gasp move by Miles Toyota’s Ransley saw him sneak by Vodanovich for the win.

Opportunity has been Ransley’s biggest friend this season and combining that with consistent speed at every round has made him one of the key players. The 23 point deficit to Robotham is close, but even that margin is probably unreflective of just how good Jaden has been.

In short, any of the three could take the title and it’s really too close to call as they move to this weekend’s Grand Prix meeting. One thing is for certain, however. A retirement for any of them or all of them during the weekend could open the door to the pack behind in what has been a fiercely competitive field.

The fourth, fifth and sixth place drivers in the championship – Campbell Stewart in his Total Oil car, Connor Adam in his Post Haste machine and Brock Gilchrist in his NEXUS Logistics car –  have had contrasting seasons so far.

Stewart is another to have turned heads this season. By the third round he had joined the trio of front runners as a pace setter and this form is likely to continue this weekend. Adam and Gilchrist have had their moments too and could be considered solid prospects for podiums and a good bet for a race win at some point during the Grand Prix weekend.

Just behind those three in the championship chase is Justin Allen, the familiar Battery Town supported driver, a Manfeild specialist and enjoying a solid second season in the category. If the stars align for him this weekend, he could be a contender for a first win in the category. One thing’s for sure, he’ll definitely be towards the front of the pack at home.

The Best Bars Toyota 86 Championship racers have four sessions on track over Saturday and Sunday. There’s qualifying and one race on Saturday with two further races on Sunday.