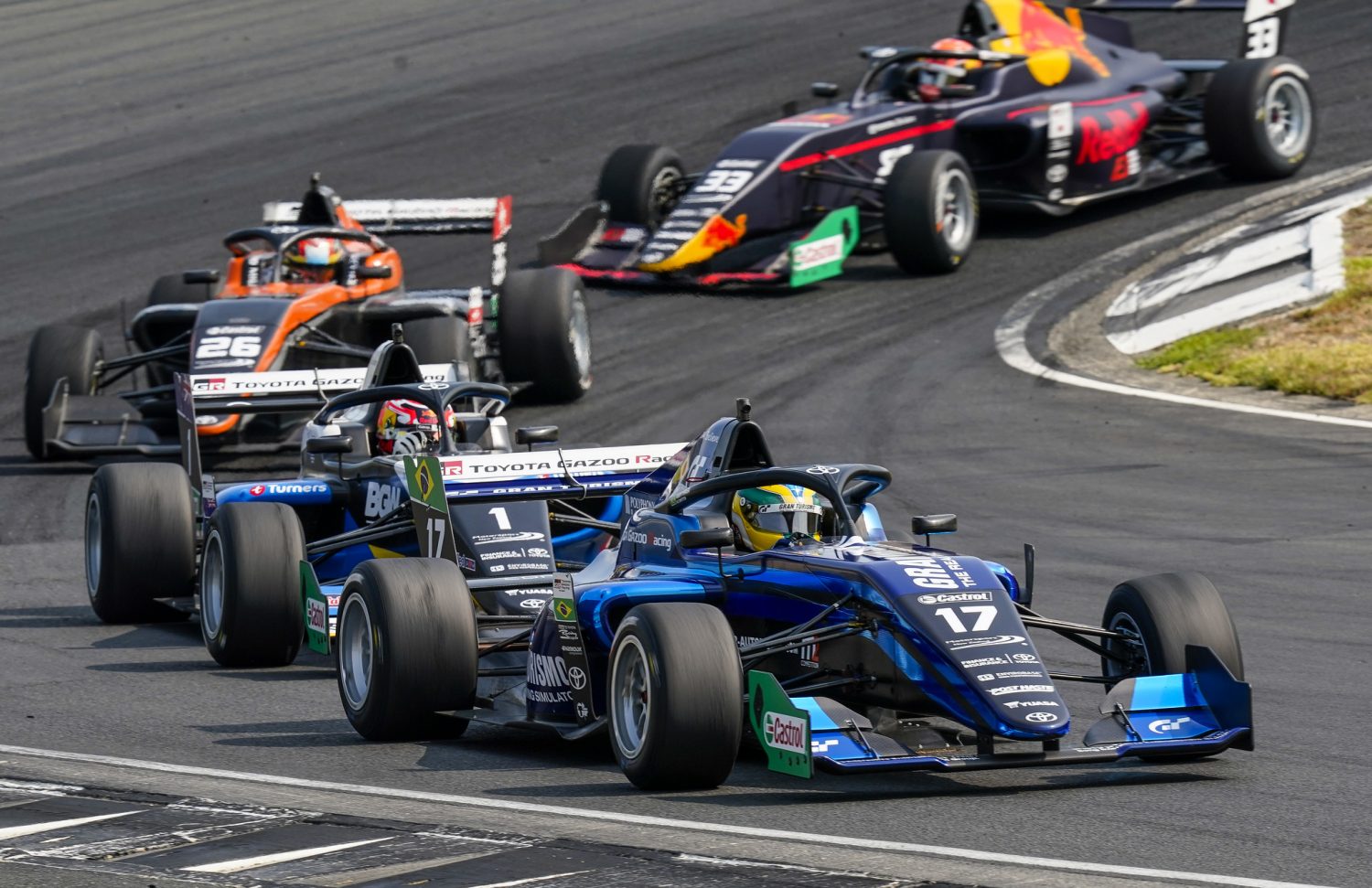 Brazilian sensation Igor Fraga took the Denny Hulme Memorial Trophy and the Castrol Toyota Racing Series championship lead in dramatic style this afternoon at Hampton Downs as champion Liam Lawson’s day ended down and out in the gravel.

Hulme, New Zealand’s only F1 World Champion, won the 1974 Argentine Grand Prix in searing heat. He would no doubt have approved of Fraga’s calm and composed performance in the very hot conditions of Hampton Downs as the 21 year old Brazilian racer secured the very same trophy that Denny lifted at the Buenos Aries track 46 years earlier.

Hulme was a survivor in Argentina on that Sunday afternoon, avoiding the carnage and failures around him to win. He came through from the outer reaches of the top six to take an historic victory, his last in Formula 1. Fraga, however, had it just a little easier, having led from the start. It seemed more than fitting that Anita Hulme, Denny’s sister, was on hand to present the trophy.

“This one was especially tight,” said Fraga afterwards. “At the beginning I had a lot of pressure from Liam. I think we gave each other just enough room to race and at the end winning like this is very, very special. From here, we need to keep the momentum.”

Fraga’s cause was helped considerably by the endless drama that ensued behind him in the 25 lap race. The first of two Safety Car periods came on lap four when Emilien Denner parked up his car on the turn two run off. The second Safety Car came later after M2 Competition team mate Liam Lawson’s car suffered a technical gremlin, slowed and was hit hard by an innocent Spike Kohlbecker. The third came immediately after the restart for that stoppage as Ido Cohen, Axel Gnos and Rui Andrade were eliminated after contact on the rolling restart itself.

That final incident brought out the red flag while the mess was cleared up. A final restart leaving just three racing laps for the remaining 12 runners saw Fraga cruise home to take the win, with Grégoire Saucy second for Giles Motorsport and Yuki Tsunoda – another survivor of the drama – coming home for the final step of the podium in his M2 Competition run Toyota FT60.

It was a tough afternoon for Lawson. Having made an average start and lost a place to Saucy, the champion had a fight back on his hands but got on with the job in impressive style. He passed Grégoire with his elbows out and then set about catching the leader. He got his chance at a pass on the first restart sitting on Fraga’s outside as they went head to head around the first turn. A wild ride over the outside kerbs did little to diminish his enthusiasm and he was a constant thorn in the Brazilian’s side until his lap ten retirement.

Behind Tsunoda, Caio Collet was another survivor for mtec Motorsport in fourth, as was Lirim Zendeli in fifth for Giles Motorsport. Henning Enqvist was one of the biggest beneficiaries of the afternoon action to claim his best result in the championship so far with a sixth place, while Lucas Petersson finished seventh. Franco Colapinto had an eventful afternoon for Kiwi Motorsport after winning the Sunday morning race. He spun after contact with Jackson Walls at turn one on the first restart and went to the back of the pack, but fought back to make the most of the Safety Car periods and a couple of great passes to wind up eighth at the end. Oliver Rasmussen came home ninth and Petr Ptacek, who had shown considerable pace throughout the weekend came home tenth after pitting early in the race.

After winning the Saturday morning’s race at the North Waikato track, and finishing fourth in Sunday morning’s second encounter, Fraga heads to Pukekohe for the New Zealand Motor Cup meeting with a slender 17 point lead in the championship over Lawson.

Having put his name on one piece of historic New Zealand sporting silverware this weekend, he’ll no doubt be keen to cement his championship challenge by adding his to a long list of iconic driver’s names on the fabulous Motor Cup trophy.