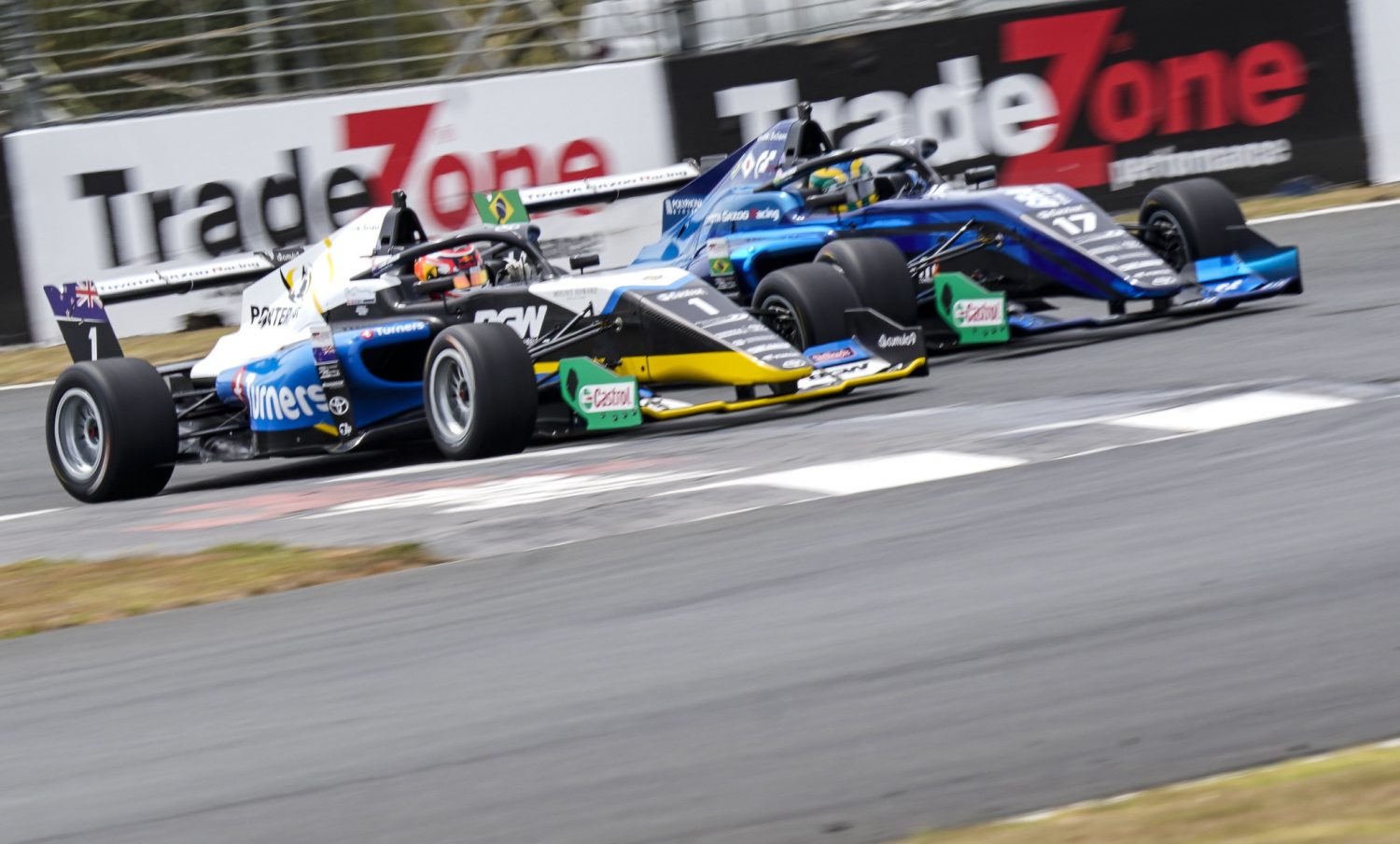 It was advantage Liam Lawson after the New Zealand Motor Cup race at Pukekohe Park this afternoon, as the Kiwi put his name alongside those of the most famous names in motor racing.

Prince Bira, Chris Amon, Jackie Stewart and Stirling Moss – as well as a list of motorsport royalty as long as Lawson’s arm –  all have a place on the fabulous Motor Cup trophy and Red Bull Junior’s utter dominance rightly saw his name added to theirs.

In the process of a weekend where he bagged two wins and a fourth, the reigning champion turned a points deficit to principal rival Igor Fraga into a handy championship lead of eight points with just three races including the New Zealand Grand Prix remaining in this season’s Castrol Toyota Racing Series.

The expected duel between the championship protagonists Lawson and Brazil’s Fraga evaporated on the fourth corner when Grégoire Saucy, who had made a great start and jumped to third, tipped Fraga into a spin and to the back of the field. From that moment Lawson was effectively home free and sprinted away from the field twice after a single Safety Car period to win by almost seven seconds from Argentina’s Franco Colapinto and German Lirim Zendeli.

“I’m very happy with this one, we missed out on this one last year,” said a delighted Lawson afterwards. “It’s nice to have it this time and to turn this weekend around. We were very disappointed after last weekend.

“It’s unfortunate what happened to Igor at the start. Our pace was really good though. I’m not going to lie, we were flat out the whole race. It’s obviously better to be ahead on the points now than being behind but it’s still very close and I’m sure the weekend at Manfeild will be close too.”

The start was clean as the seventeen runners raced into Pukekohe’s first sequence of turns. Missing from the field was Emilien Denner for M2 Competition with a wrist injury sustained in his Saturday off and it was a race that was to provide some significant highs and lows for his team.

Lawson and Fraga sat side by side around the first turn and as they braked for the turn three and four combination, Lawson took the advantage and Fraga tucked in behind. At the exit of the corner however, a fast-starting Saucy hit the eSports champion in the rear and spun him around and to the back of the field. It took him some time to get going and it looked like his race was effectively run.

Lawson made good his escape, but within a couple of laps the Safety Car was brought out to pick up a front wing left on the track by Lucas Petersson, which was exceptionally good news for Fraga. He rejoined the pack in 16th and was swiftly past Axel Gnos into 15th. Saucy was then given a drive through penalty and that elevated Fraga again. His progress on the super-fast Pukekohe track was relentless and in quick succession he went by Spike Kohlbecker on lap 10, Oliver Rasmussen on lap 12 for a top ten position, then Jackson Walls and his final pass was in the closing stages on Tijmen van der Helm elevated him to eighth place at the flag.

Good though the recovery drive was, Fraga’s championship lead was overturned by Lawson’s utter dominance. Eleven points ahead in the championship going into the race, Fraga crossed the line to finish eight behind.

If Fraga’s drive through the field was mesmeric, then so was team mate Yuki Tsunoda for Japan and Red Bull Junior. Starting 16th after a problematic qualifying, the Japanese ace came alive in the race, ending the first lap in eighth place and then steadily dealing with cars throughout the race to move up to a remarkable fourth place by the end of the race.

Behind the top four Petr Ptacek completed another good weekend with fifth, with Ido Cohen impressing again in sixth, Caio Collet a relieved seven after a challenging weekend for him and his team, Fraga in eighth, Van der Helm in ninth and Sunday morning winner Jackson Walls rounding out the top ten.

The drivers and teams now head to Manfeild Circuit Chris Amon to compete for the 65th New Zealand Grand Prix, and for Lawson and Fraga, the 2020 Castrol TRS title. It’s all to play for and with both now confirmed for a European Formula 3 campaign after the TRS season, it’s a rivalry which could continue unabated long after next weekend’s New Zealand showdown.