Jaylyn makes it two from two 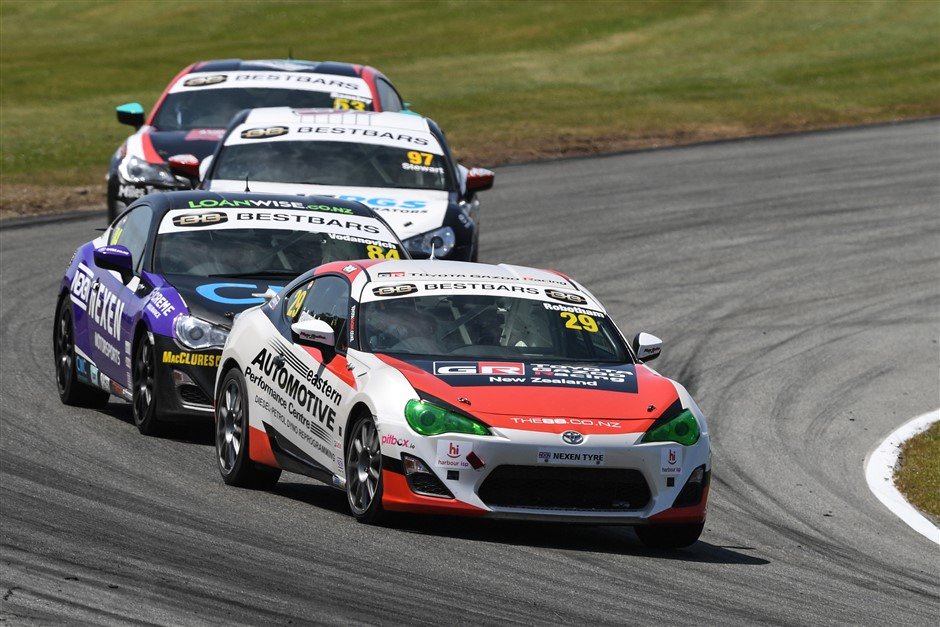 Jaylyn Robotham made it two from two for Australia and the Eastern Performance Centre team as he led from lights to flag in another epic Best bars Toyota 86 encounter at Teretonga Park on Sunday.

On his first visit to the circuit, the talented racer once again headed a multi-car battle for the lead that featured three wide racing and some fantastic slip streaming battles.

At the start, it was another drag race between the top two contenders from Saturday, with Robotham and Campbell Stewart in the Total Oil car leading the drag race from the front row to the first corner. And once again it was Robotham who held his line around the fast and long corner to emerge in front. Connor Adam had made a great start from the third row to jump Jaden Ransley for fourth position while Peter Vodanovich sat in third place in the NEXEN DTM car.

As they crossed the line for the first time it was Robotham, Stewart, Vodanovich, Adam and Ransley occupying the top five places, but it all went wrong for Adam on the second lap when his car slowed suddenly He lost a number of places before the car got going again, and rejoined near the back. This promoted Ransley back to fourth and he was quickly in the mix for the lead when the three leaders went three abreast into turn one, compromising their own speed in the interest of places. The order at the exit of turn one remained unchanged, but Ransley was a lot closer.

Also going well was CareVets racer Ryan Wood, continuing his improvement in his first season of car racing after a successful career in karts. He had Ransley in his sights and would be a thorn in the Miles Toyota driver’s side for the remainder of the race. That battle, which also had Richard Peasey in close proximity had also been joined by Brock Gilchrist in the NEXUS Logistics car as the field once again put on some fantastic side by side racing and nose to tail slipstreaming down the long Teretonga straight as six duked it out for the lead.

A poor exit on the final corner of lap ten slowed second placed Stewart just enough and Vodanovich needed no invitation to put his car on the inside of the start of the straight and use his better drive – and a bit of the grass – to get by. Immediately after passing him, Vodanovich set off after Robotham and the two were able to build a lead of a few car lengths on the chasing pack, who were still dicing well for third.

The group became five after Peasey was forced into the pits and Gilchrist dropped off the lead pace and at the flag it was Robotham – just – from Vodanovich, with Stewart holding off Ransley and the impressive Wood to take the final step on the podium.