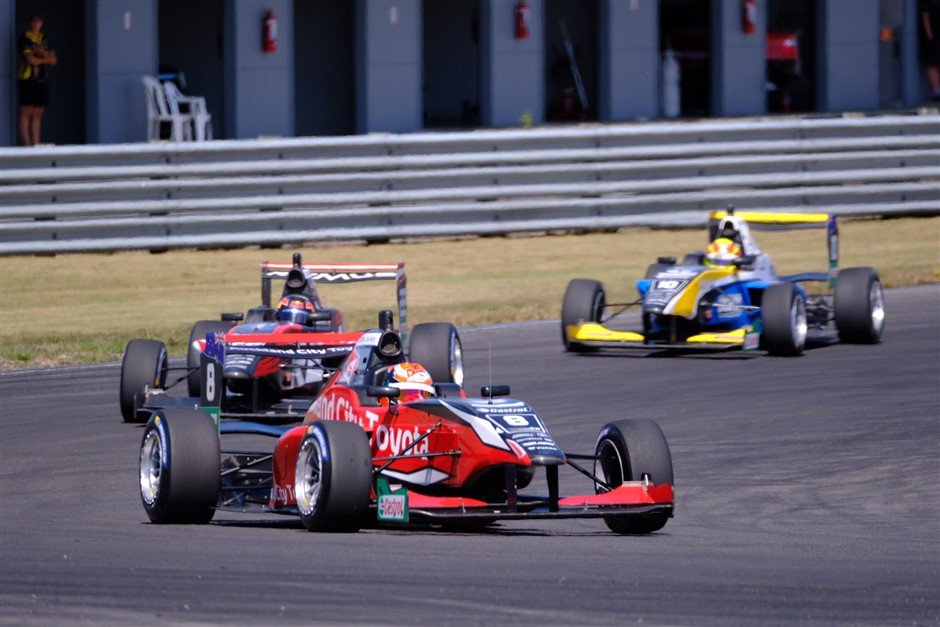 Marcus Armstrong ended a challenging weekend with a dominant performance in the Denny Hulme Memorial Trophy race in Taupo on Sunday afternoon, narrowing the gap to series leader Liam Lawson to just five points with it all to play for at the 64th New Zealand Grand Prix next weekend.

After qualifying second, Armstrong made a perfect start to out drag pole position man Lucas Auer to the first corner and that effectively locked out the race, with the Kiwi having far more pace than Auer and able to control the race. In the first couple of laps they simply raced away from the pack behind, which was led by Belgium’s Esteban Muth and series leader Liam Lawson.

Further back, Brendon Leitch had made yet another fabulous start to vault up the order through the first few corners, but wasted it with a wild ride around the super-fast turn 9 which lost him several places.

As the 20 lap race progressed, Armstrong looked completely in control out front, while Auer seemingly had no answer to his pace, Armstrong lapping tenths quicker on every lap. Lawson, locked in behind Muth, could not find a way past his M2 Competition team mate and try as he might, the gap to the two leaders in front just grew. You could sense his frustration as he went left and then right at almost every opportunity to get past, but Muth’s defence was strong. An additional problem for Lawson was Raoul Hyman, taking the opportunity to draw up to Lawson’s car and pose a threat from behind.

After five laps it was Armstrong, one and a half seconds up on Auer, with a couple of second to the battle between Muth, Lawson and Hyman for third, then Kazuto Kotaka, Calan Williams, Brendon Leitch, Cameron Das and Petr Ptacek followed by the rest.

The race settled into a pattern, with the focus being on Lawson’s brave but failed attempts to pass Muth and a similar battle with Das trying to find a way around Leitch, which he eventually managed with a great move at turn 11 on lap 9.

The halfway mark passed without incident, but the good work done by Armstrong came to a temporary halt on lap 13 when Parker Locke, attempting to pass Ptacek and get his car into the top ten, collected the Czech racer and spun both. Both cars had suspension damage – the front for Locke and the rear for Ptacek, and it meant first a Safety Car and then a red while the two immobile cars were removed form the track.

The race got back underway with four to go and in what could prove to be a crucial moment in an epic championship, Lawson dived up the inside of Muth into turn 1 and scrabbled around just ahead to grab third as Armstrong and Auer, who had both made good restarts, disappeared into the distance. A few corners later and the safety car was out again after Thomas Smith and Petrov clashed at the final chicane and left too much of a mess for the recovery truck to clean up in time for a restart. The race ended behind the safety car and a delighted Armstrong took the Denny Hulme Memorial Trophy for the second time, having secured it in 2017 as well.

“It’s quite strange,” he reflected afterwards. “Yesterday in no way, shape or form was I able to fight for the win, then today it was quite easy. I didn’t have to push really hard to build a gap to Lucas. It just worked today. Yesterday I had to push very hard and it wasn’t enough. I’m really happy to have won the race, and to make up for failed suspension yesterday.

“We’re right back in the Championship fight. I think it will be close as usual. I’m sure it will go down to the wire. It will be a spectacular show. I have to make up for what happened last year and take the title.”

A week ago, Lawson was over 30 points behind and the momentum was with Armstrong. The pendulum swung again at Taupo and despite scoring nothing on Saturday, Armstrong fought back. With the scores now 278 points for Lawson and 273 for Armstrong, the series can look forward to one of the biggest weekends in New Zealand motorsport for some time.

With the likes of F1 driver Lando Norris and thousands of others following the topsy turvy championship as it unfolds, the eyes of the world are also surely set to be on the climax to an epic battle between New Zealand’s two brightest young single seater prospects.